Pitt's Slip (or Pitt Slip) is the name of an anchorage between the Port of Pensacola and Bartram Park on the eastern side of the Barracks Street terminus. It is named for B. R. Pitt, whose planing mill was located on the site in the late ninteenth and early twentieth centuries. Seville Harbour, home of the Fish House and Atlas restaurants and a marina, was built there circa 1986.

In the early 1970s, the Historic Pensacola Preservation Board drafted a master plan for the Historic Seville area that included a marina-type development at the Pitt's Slip site. In 1977, the 3.5-acre parcel fronting Pitt's Slip was condemned by the City of Pensacola, which entered into purchase negotiations with its owners, Capital Realty Holding. They also received a $119,250 federal matching grant from the Bureau of Outdoor Recreation to purchase the land.[1] In 1979 the city (through a circuit court Order of Taking) was cleared to take ownership for the appraised value of $238,500.[2] The stated purpose of the condemnation was for "park, recreational and other purposes for the benefit of the general public."[3] The Preservation Board hoped to combine the property with 3 acres of adjacent city- and state-owned land and request proposals from private developers.

On July 26, 1979, the Pensacola City Council voted to seek an Economic Development Administration grant to develop the land as a public marina complex.[4] Dredging permits were acquired from state and federal environmental agencies over the next year and a half,[5] and city officials released land use development guidelines prepared by Maryland-based planner Cyril Paumier.[6] On July 27, 1981, the City Council voted to have the city or the CRA serve as "master developer" for the project,[7] in coordination with the Preservation Board.

A proposal presented by the Harbour Corporation — made up of Cooper Yates, F. A. Baird, Jr., John S. Carr, Richard R. Baker and Walter J. Ritchie, Jr. — that included a restaurant, retail shops, office space and a 98-slip marina was given tentative approval by the Preservation Board on July 14, 1981,[8] although the city nixed the Harbour Corp.'s request for an exclusive 99-year lease of the property.[9] (The Preservation Board later agreed to lease most of their portion of the property to the city for $1 per year, in exchange for permanent easements for water and pedestrian traffic.[10])

Later that year the city opened the project to other bids, sparking a complaint by Yates, who said he had met informally with city manager Steve Garmen and city planners in creating their proposal and had been "assured back then that we were the only people that were even interested."[11] Three of the Harbour principals — Baker, Carr and Ritchie — splintered off and submitted their own proposal. A third proposal was also presented by Arcadia Realty Group, represented by Don Ripley.

The $3.4 million plan from Harbour Corporation, designed by architect William Graves, was selected by the City Council in early 1982. The selection sparked complaints that the CRA's evaluation process did not give weight to the city's projected financial return to the city and mistakenly equated "open space" with "public accessibility."[12] It also gave credence to rumors that Harbour Corp.'s selection had been influenced by W. D. Childers, close friend to Yates and then-president of the state Senate, who allegedly told several city officials he would secure funding for other city projects (like a proposed civic arena) if Yates was awarded the Pitt's Slip project. (Yates had recently been appointed to the Historic Pensacola Preservation Board by Governor Bob Graham, on Childers' recommendation, but said he would abstain from votes related to his duties as developer.) Childers and several councilmen denied all allegations of political pressure.[11]

A question of clear title had also emerged in this time, as land accreted by tidal action was not included in the property condemned by the city, so a portion of land was still owned by Capital Realty Holding. Capital's attorneys, Richard Warfield and Charles Kahn, also alleged that the "order of taking" was granted under the impression that the land would be reserved for public use — not private development. The city ultimately settled with Capital Realty for $475,000 total.[13]

Another hurdle came in 1983, when it was discovered that a half-acre parcel in the Pitt's Slip property had been purchased in 1969 with U.S. Housing and Urban Development monies on the condition that it be maintained as "open space" — a provision that had gone unnoticed throughout the bidding process.[14]

On September 27, 1983, Baird and Yates announced they wanted to end their development agreement, saying the city had failed to deliver marketable title "within a reasonable time" as stated in the contract. They also chided the city for announcing a resolution to the title issues after they had already approached officials privately about terminating the lease. "This kind of media ploy is not what we need," Yates said. "For any such project to be successful, there has to be open and honest communication between the groups."[15]

After the withdrawal of Yates and Baird, Harbour Corp. changed hands to James R. Tanck and New Orleans developer Bernard Mason, who presented a revised proposal that added an antique carousel, an amphitheater, a railroad half-roundhouse attraction and a hotel. This plan required a much larger footprint, extending into Bartram Park and using a Port of Pensacola spoil site as parking for the hotel. When the U.S. Army Corps of Engineers forbade the latter, Harbour scaled back its plan again: several buildings were eliminated, the three-story hotel was reduced to a 28-room "guest lodge," and floor space was converted to accommodate 373 parking spaces.[16]

The City Council gave approval to the four-acre, $11 million project on September 17, 1984. However, the developers had trouble securing retail commitments. According to Tanck, an unnamed restaurateur had agreed to open a restaurant in the building, but otherwise, the only solid commitment was from the project's architectural and engineering firm, Barrett, Daffin & Carlan. Tanck blamed the chronic delays for scaring away potential tenants, but hoped that stigma would vanish once construction commenced.[17] However, the company missed two deadlines to submit "evidence of financing" to the city.[18]

When construction had not begun on February 8, 1985, the city's lease with Harbour Corp. was terminated. 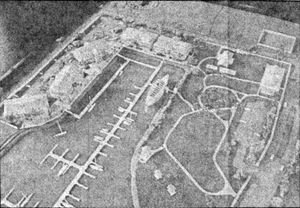 In 1985, after years of failed attempts, the City of Pensacola hired Orlando-based Florida Sun International, which had recently built the marina at Port Royal, to develop a simplified plan called "Harbour Village at Pitt Slip." Sharpe, Inc. served as project contractor. The first phase, budgeted at $2.5 million, included a $1 million, 106-slip marina with a floating pontoon dock system and two 10,000-square-foot buildings, designed by architect Carter Quina.[19] When the complex opened in 1986, its initial anchor tenant was the floating Good Neighbor Restaurant.

Later phases were planned to add three more buildings along the southern portion of the property, but this never reached fruition. The complex was renamed "Seville Harbour" in (date needed).

The land in the Seville Harbour block was rezoned by the Pensacola City Council on June 24, 1999 to allow residential construction.[20] Developers Ray Russenberger, John Carr and Doug Halford planned to build 30 upscale condominiums on the site, but the project fell through.[citation needed]