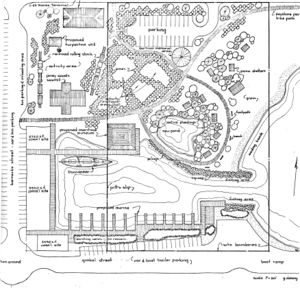 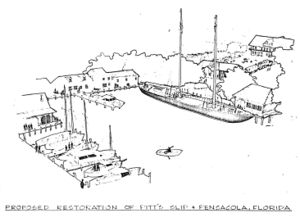 There's an undated proposal for the Pitt's Slip/Bartram Park area in the Historical Society's archives. I think it might've come from the Cyril Paumier guidelines or maybe the Preservation Board's 1970s-era master plan, but I'm not sure. Note the proposed maritime museum. It has these two conceptual drawings and the following recommendations:

Architecturally, the site assumes an interface role, serving as a transitional area between the residential scale and atmosphere of the Seville Square Historic District and the industrial character of the Port of Pensacola. The response of the design, therefore, is to negate the adverse visual impact of the port's structures through landscape screening and the placement of new structures. Elements such as a proposed museum building; the snapper smack Buccaneer, which is listed on the National Register of Historic Places; and the visual aspects associated with a commercial marina, such as masts, rigging, etc., in the foreground will de-emphasize the visual presence of the port.

Will do. Also, we may want to mention as part of the timeline that the City vacated various submerged rights of way (portions of Cedar, Magnolia/Gimble, Adams, and Alcaniz Streets) in 1985 to facilitate development. Not sure where to put it. — dscosson • talk  22:41, 14 March 2010 (CDT)