From Pensapedia, the Pensacola encyclopedia
(Redirected from CRA)
Jump to navigation Jump to search 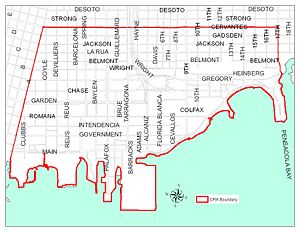 The advent of shopping centers like Town & Country Plaza and Cordova Mall north of downtown Pensacola resulted in an exodus of businesses from the downtown area. Over the years, the once-bustling retail sector became dilapidated, lowering property values. Seeking to reverse this trend, the Pensacola City Council adopted a resolution on September 25, 1980 to revitalize the city's blighted core.

On March 8, 1984, the City established a Redevelopment Trust Fund to collect revenue for improvements within the Urban Core Community Redevelopment Area.

The Urban Core Community Redevelopment Area is a 256-block, 1,308-acre area that encompasses all of the city south of Cervantes Street, bounded to the west by A Street and to the east by 17th Avenue. These boundaries are similar (but not identical) to those of the Downtown Improvement Board's taxation district. It accounts for about 8.6% of the City's total land area.

The Community Redevelopment Agency is made up of the ten Pensacola City Council members, as well as an administrator and staff. The current administrator of the CRA is Becky Bray.

David Bailey, the former administrator, served the CRA starting in 2003, until tendering his notice of his resignation on June 17, 2007, and continuing to serve until August 3, 2007.

The CRA has completed more than 35 capital construction and streetscape improvement projects since 1984. Some of these include: