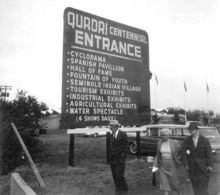 Entrance to the Quadricentennial

Aerial view of the Spanish Village

A Quadricentennial Celebration took place in 1959 commemorating the 400th anniversary of Tristan de Luna's 1559 expedition that established Pensacola as the first European settlement within the current United States.

The festival was conceived in 1949 by city leaders, who initiated a annual fall celebration of Pensacola's heritage that culminated ten years later in the Quadricentennial, which kicked off on May 14, 1959. The Florida Legislature established a state Quadricentennial Commission that oversaw a seven-year celebration of Pensacola's 400th anniversary and that of St. Augustine in 1965.[1]

The centerpiece of the Quadricentennial Celebration was a Spanish Village on Santa Rosa Island that featured recreations of colonial buildings for educational purposes.

A group of young enlisted men from Pensacola, Florida Naval Air Station take a trip into the past by visiting the unique Florida Quadricentennial's historical Spanish Village, a replica of the first permanent settlement of Pensacola.

The Quadricentennial celebration marks the 400th anniversary of the first settlement of Pensacola by Don Tristan de Luna in 1559. DeLuna's settlement was abandoned in 1562, and while another attempt was made to settle the site a few years later, it was not until 1696 that a colony was permanently established.

The village is one of two parts of the Quadricentennial exhibition here. The tour includes also a visit to the Historical Pavillion, which houses the city's five flags, original maps and charts, wax statues of men who figured in the city's history, the weapons they used and dioramas of famous battle scenes. This exhibit spreads through four buildings located near the village. The entire display is located on the salt-white beaches of the Gulf of Mexico. Thousands of vacationers are discovering the area to be veritable paradise for family fun and living.

This 18th century woodcut depicting the Spanish Village at Pensacola, Fla., in 1743 was used as a model by archetects designing a facsimile for Florida's Quadricentennial celebration which opened this summer(1959). Planners reconstructed the principal buildings shown in the drawing by a Spanish traveler which appeared in a London magazine in 1763. The 1959 village appears on Santa Rosa Island, same as the original, is shown in picture above.

Spanish artisans display their works for the visitors at the steps of a village dwelling. Artisans are from Madrid Trade Fair and work with the tools typical of two centuries ago. All are experts in their trades and will remain at Pensacola village until September.

The seranade of a lovely Spanish-speaking guide was one of the highlights of the visit. One white hat wanted to make it a duet. The guide told them the grillwork on the windows was for the protection of the senioritas...and for the discouragement of thieves.

The white hats attempt to prepare their own chow in the kitchen of the Commandant's house. Early Pensacola settlers used floor-level hearth stones for cooking and house heat. The smoke was discharged through vents in the ceiling.

A quick snooze on the military commandant's 1700 model bed was a high point of the visit for one sailor. The commandant's home was shaped as a blockhouse for additional village protection. It was the first building hit when British guerillas from the Carolinas struch at Pensacola.

The Church: a moment of solemnity was added by a stop in the Village Church. The eight-sided building was officially dedicated in ceremonies on Pensacola Beach, May 17, 1959. The Commemorative Cross rising above Santa Rosa Island, down Fort Pickens way, is a cross commemorative of the first mass held by the friars of DeLuna's company when the landed on the North American continent. The mass was held to give thanks for their safe thirty day voyage from Vera Cruz.

The Most Reverend Thomas J. Toolen, Archbishop, and bishop of the Diocese of Mobile-Birmigham is shown during the dedication ceremonies for the octagonal church in the replica of the church in the 1723 Spanish Village on Santa Rosa Island. Dedicated on May 17, 1959, the church will be used for services for the Santa Rosa Island residents. Other church officials in the scene are the Rt. Rev. William J. Cusick, pastor of St. Michael's Church; the Reverend George C. Royer, pastor of St. John's Church; Bishop Toolen; and the Reverend Alexander O'Neill, pastor or St. Stephen's Church.

This 17th century cannon was loaded, about the only sailor in a safe position is the one looking down the barrel. The cannon is one of several which line the walls of the replica of the old Spanish fort which offered protection against French and English invaders.

Every village must have a commissary or trading post. Pensacola in 1743 was no different. Here, visitors stop for a quick lift before they continue the tour.

"There was nothing like this in gunnery school." The young sailors playfully aim a 1675 model spanish musket at a pretty Quadricentennial guide.

A seaman, acting as village governor for the moment, allows his buddies a brief interview. All furnishings in the mansion, as well as ofhter key buildings, are 18th century originals, selected for showing at the Quadricentennial by the Mexican government.