From Pensapedia, the Pensacola encyclopedia
(Redirected from Tristan de Luna)
Jump to navigation Jump to search 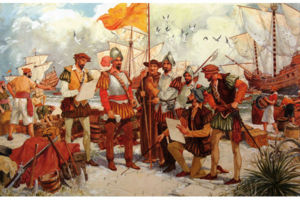 Don Tristán de Luna y Arellano (1519–1571) was a Spanish conquistador of the 16th century who led an ill-fated expedition to the Pensacola area in 1559, credited as America's first settlement.

He came to New Spain in about 1530. In 1545 he married Isabel de Rojas.During his years in Mexico, de Luna served with Francisco Vásquez de Coronado on his expedition to the Seven Cities of Cíbola and crushed an Indian rebellion in Oaxaca.

De Luna was chosen by Luis de Velasco, viceroy of New Spain, to establish a settlement on the Gulf Coast of what is now the United States and clear an overland trade route to Santa Elena (on Tybee Island, Georgia), where another outpost would be founded. De Luna, however, proved an incompetent leader, and the expedition was plagued by disaster.

On June 11, 1559, de Luna set out from Mexico with 500 soldiers, 1,000 colonists and servants, and 240 horses. Around August 15 of the same year, he sailed into Pensacola Bay, and established an ephemeral colony on the shore soon thereafter that became the first European settlement within the continental boundaries of the United States.

The party anchored in Pensacola Bay, which they called "Ochuse", and set up the encampment of Puerto de Santa Maria during the summer of 1559 at the site of the modern Naval Air Station Pensacola. With much of the colony's stores still on the ships, de Luna sent several exploring parties inland to scout the area; they returned after three weeks having found only one Indian town. Before they could unload the vessels, a hurricane swept through and destroyed most of the ships and cargo. With the colony in serious danger, most of the men traveled up the Alabama River to the village of Nanipacana (Nanipacna or Ninicapua), which they found abandoned; they renamed the town Santa Cruz and moved in for several months. Back in Mexico, the Viceroy sent two relief ships in November, promising additional aid in the spring.

The relief got the colony through the winter, but the supplies expected in the spring had not arrived by September. De Luna ordered the remainder of his force to march to the large native town of Coca, but the men mutinied. Bloodshed was averted by the settlement's missionaries, but soon after Ángel de Villafañe arrived in Pensacola Bay and offered to take all who wished to leave on an expedition to Cuba and Santa Elena. De Luna relented and agreed to leave, eventually returning to Mexico. The Pensacola settlement disbanded completely within several months of his departure. De Luna was appointed governor of Yucatan in 1563 and remained in that capacity until his death in 1571.[2]