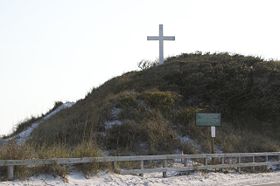 The cross on Pensacola Beach

The Island Cross is a Pensacola Beach landmark that commemorates "the first [Western] religious service in the Pensacola area" (and by extension the United States) on August 15, 1559, when Dominican friars with the Luna expedition performed a mass on Santa Rosa Island celebrating the Assumption of Mary.

The 10-foot, cast concrete memorial was established in the lead-up to the 1959 Quadricentennial Celebration by the Knights of Columbus, De Luna Assembly. About 100 people attended the May 3, 1954 dedication by Mobile Bishop Thomas J. Toolen, but only a handful remained after a rainstorm sent most back to their vehicles. It was originally located on the north (Sound) side of Fort Pickens Road as part of the Spanish Village, but was later relocated to a sand dune on the south (Gulf) side.

In the 1960s, the cross became a meeting place for visitors to the beach. "That cross was there when I was in high school," recalled SRIA director W. A. "Buck" Lee. "When someone was saying, 'Let's meet at the beach,' we would say, 'See you at the cross.'"[1]

The cross and the dune on which it sits have withstood numerous hurricanes over the years, even as neighboring dunes and structures were swept away. This is cited by many religious residents as evidence of "divine protection."[2] The commemorative marker, however, did not survive Hurricane Ivan in 2004. It was replaced by the Knights of Columbus and rededicated on August 15, 2006.[3]