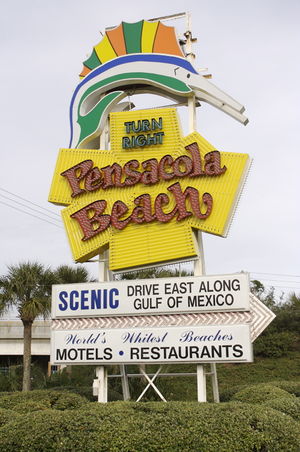 The Pensacola Beach sign is an iconic Gulf Breeze landmark that points the way to the Bob Sikes Bridge and Pensacola Beach. The colorful, 60s-era sign sits along Gulf Breeze Parkway and features an orange-, yellow- and green-finned sailfish on both sides. The words "Pensacola Beach" are set in red against a gold starburst, the neon backlights of which are animated at night. The main side of the sign instructs motorists to "turn right" for a "scenic drive east along Gulf of Mexico" and touts the "World's Whitest Beaches" along with motels and restaurants.

Although located in Santa Rosa County, it is owned and maintained by Escambia County.

The original sign was commissioned in the late 1950s by the Santa Rosa Island Authority. It was designed by Patricia Born of the Dodson, Craddock & Born advertising agency and built by Lamar Advertising in 1960. According to Born, the design was intended to give Pensacola a "big town" feel.

Initially erected atop the Escambia Motors building at the northwest corner of Gregory Street and Palafox, it pointed the way to the Pensacola Bay Bridge. The Island Authority had a lease-purchase agreement with Lamar wherein they would pay $350 per month for the first five years and $150 per month for the next five years, after which ownership of the sign would be transferred.[1] In January 1962, the SRIA board voted to move the sign to Gulf Breeze. Born later recalled that the sign was moved because "a lot of people visiting Pensacola didn't know … they had to cross two bridges, and some would just keep going (on U.S. 98) to South Florida."[2] Lamar agreed to facilitate the move and make adjustments to the wording for an additional $150 per month over one year.

As the gaudy "Populuxe" style of the 1950s and 60s became unfashionable, many residents attempted to have the sign removed, a sentiment that was resisted by Jack Cowley and others.

More than forty years after its creation, the original metal sign, made up of two 20-foot-long sailfish, had rusted and was replaced in July 2003. One fish was donated to the Pensacola Historical Society, and the other was sold at auction, with proceeds going to the County's general fund. Restaurateur McGuire Martin held the winning bid of $4,955 and has displayed the fish at his Flounder's restaurant. "It is a Pensacola icon, and a lot of people have seen it," Martin said. "We wanted to keep it on the beach."[3]

After sustaining heavy damage in Hurricane Ivan and other storms, the sign was replaced again over the course of 18 months in 2005 and 2006. The animated center portion was recreated by Plastic Arts Signs of Pensacola, which won the $135,000 contract in April 2006. It contains miles of wiring and nearly 900 feet of handmade neon tubing.[4]

Since its creation, the Pensacola Beach sign has been featured prominently in marketing materials for Pensacola tourism. Its likeness has been translated to other media as well: