From Pensapedia, the Pensacola encyclopedia
(Redirected from Pensacola Beach)
Jump to navigation Jump to search 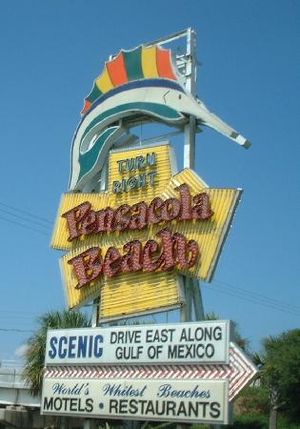 Pensacola Beach is an unincorporated community located on Santa Rosa Island, in Escambia County. As of the 2000 census, the community had a total population of 2,738.

Diego Malanado, a captain under Hernando de Soto (WP), visited the area during the early Spanish exploration of North America. He anchored in Pensacola Bay for the winter of 1539–1540.[1][2]

In 1559, Don Tristan de Luna y Arellano led the first settlement of the region, coming from Vera Cruz in New Spain (WP), present-day Mexico. His convoy of eleven ships anchored in the bay, with 1500 settlers, and established a colony on the site of today's Naval Air Station Pensacola. A hurricane severely damaged the colony a few weeks later, sinking some ships, but the flooded colony suffered through famine and fighting with the local tribes, trying to expand to a chain of regional settlements, with many going to present-day South Carolina. However, another hurricane there (within 2 years) caused the Spanish to abandon the effort, going to either Cuba or rescuing the remaining settlers near Pensacola back to Vera Cruz. Based on progress assessment (judged in New Spain) about the Florida storms, fighting and famine, this first Gulf Coast colony was officially abandoned in 1561, for 138 years. Atlantic Florida was settled at St. Augustine, but the American Gulf Coast was only resettled at "Panza-cola" (pig-tail) in 1699.

A presidio was later constructed on Santa Rosa Island in 1722, near the location of the more recent Fort Pickens. Hurricanes in 1741 and 1752[1] forced its relocation to the mainland.

Pensacola Beach was accessible only by boat until June 13, 1931, when a trio of projects by the Pensacola Bridge Corporation — the Pensacola Bay Bridge, the Santa Rosa Sound Bridge and the Casino — gave visitors both a reason and the means to visit the island community. Since then Pensacola Beach has become a major tourist destination.

Pensacola Beach is located at 30°20′00″N, 87°08′15″W, on the barrier island of Santa Rosa. It is bordered to the south by the Gulf of Mexico, to the north by Santa Rosa Sound and Pensacola Bay, and to the east and west by the Gulf Islands National Seashore.

As a community located on a low-lying barrier island, Pensacola Beach is extremely vulnerable to hurricanes. Landfalling storms frequently drive storm surge over large portions of the island, damaging or destroying manmade structures and causing significant beach erosion. In 1995, two hurricanes made landfall on the island causing extensive damage. Hurricane Erin made landfall in August while Hurricane Opal blasted the island just two months later, leveling the dunes and destroying a number of homes.

On September 16, 2004, Hurricane Ivan devastated the Pensacola Beach area, destroying more than 650 homes and damaging many others.

On July 10, 2005, Pensacola Beach was again in the path of a hurricane; Dennis made landfall between the city and neighboring Navarre Beach.

There is one school on Pensacola Beach. The Pensacola Beach Elementary School is for children from kindergarten through fifth grade. This school has an enrollment ranging from 120 to 140 students. All elementary-school age children on Pensacola Beach are eligible to attend the school. The first year the school was open, for the school year 1977-1978, classes were held in an empty A-frame house owned by a local named Harry Gowens. The Pensacola Beach Volunteer Fire Department building was also used in aiding the teachers and administrators. In November 1977, four portable buildings were moved to the present site. The school continued to grow and has been ranked as an 'A' school in the state for many years running. They have also received the 5 Star School award since 1998. This award recognizes schools with exemplary student involvement. In 2001 the Pensacola Beach Elementary severed its ties to the Escambia County School District and became a Charter school. Now the school, with the help of parents, volunteers, and the community, must find ways to pay for their resources and staff.

There are only two churches on the island of Pensacola Beach. It is under the laws and guidelines of the Santa Rosa Island Authority that these be the only churches on the island.[citation needed] The first is the Pensacola Beach Community United Church. It is a non-denominational church. The second is the Our Lady of the Assumption Catholic Church. Our Lady of the Assumption church is a mission church of St. Ann's Catholic Church located in Gulf Breeze.