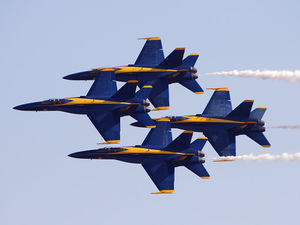 The Blue Angels during a show

The United States Navy's Blue Angels (or, officially, the Navy Flight Demonstration Squadron), formed in 1946, is a renowned military aerial demonstration team. Since 1954, the Blue Angels have been based at NAS Pensacola.

The Blue Angels first flew three aircraft in formation, then four, and currently operate six aircraft per show. A seventh aircraft is available for backup, in the event of mechanical problems with one of the other aircraft, and for giving public relations "demonstration flights" to civilians, usually selected from a press pool.

The parameters of each show must be tailored to local visibility: In clear weather the "high" show is performed, in overcast conditions it's the "low" show that the spectators see, and in limited visibility (weather permitting) the "flat" show is presented. The "high" show requires an 8,000-foot ceiling and visibility of 3 nautical miles from the show's centerpoint. "Low" and "flat" ceilings are 3,500 and 1,500 feet respectively.

The Opposing Solos usually perform maneuvers just under the speed of sound which showcase the capabilities of their individual F/A-18s through the execution of high-speed passes, slow passes, fast rolls, slow rolls, and very tight turns. Some of the maneuvers include both solo F/A-18s performing at once, such as opposing passes (toward each other in what appears to be a collision course, narrowly missing one another) and mirror formations (back-to-back. belly-to-belly, or wingtip-to-wingtip, with one jet flying inverted).

At the end of the routine, all six aircraft join in the Delta formation. After a series of flat passes, turns, loops, and rolls performed in this formation, they execute the team's signature "fleur-de-lis" closing maneuver.