Henry Croskey Mustin (1874-1923) was one of the first nine Naval officers who established the Naval Aeronautic Station (now Naval Air Station) on the site of the abandoned Navy Yard at Warrington in 1914. He was designated Navy Air Pilot No. 3 and later Naval Aviator No. 11.

Born in Philadelphia, Pennsylvania on February 6, 1874, Mustin graduated from the U.S. Naval Academy in 1896. He spent the two years at sea, as required by law, before he was commissioned an ensign in 1898. From then, until he reported to duty in aviation fifteen years later, he distinguished himself as a remarkably capable officer in the surface Navy.

After receiving his commission, Mustin served during the next eighteen months on board six different vessels. From October 1899 to March 1900, he served command of the USS Samar, a gun boat on the Asiatic station. While commanding the Samar, during the capture of Vigan, Philippines, Mustin won a commendation for towing the boats of the battleship USS Oregon to shore and aiding in covering the landing. After an night of carousing in May 1900, Mustin was court-martialed for leaving his station and sleeping on watch, resulting in the loss of five numbers in grade. (The court-martial reconvened to pardon him, and he eventually had his numbers restored by President Theodore Roosevelt, who heard Mustin had punched a British sailor for insulting the U.S. Navy during the night in question.)

Mustin was also interested in the technical aspects of ordnance and helped develop a telescopic sight that would aid in increasing the accuracy and range of naval gun fire. He made his first flight while on duty at the Philadelphia Navy Yard. In January 1911, he aided Holden Richardson in an experiment with a glider, which Richardson designed and built. Mustin soloed on March 13, 1913. 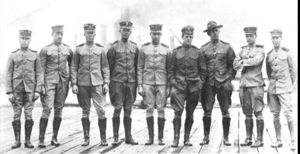 In 1913, plans for a national naval air service were taking shape, and Pensacola was chosen over Annapolis as the site of a training facility, as the warmer Gulf weather would be better for year-round flying. On December 31, 1913, Mustin reported for duty as executive officer of the USS Mississippi, a battleship being sent to Pensacola Bay for training purposes. On January 6, 1913, under a new ranking system for officers, Mustin was designated Navy Air Pilot No. 3 (after Theodore G. Ellyson and John H. Towers). A detachment of nine officers and about two dozen enlisted men arrived at Pensacola on January 20 and began to establish the new school. It was operational by February. Mustin and his wife and two sons, Lloyd and Henry Ashmead, moved into Quarters A on the station. 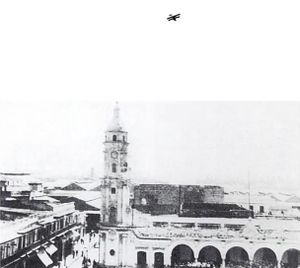 Naval aircraft over Veracruz in 1914

Following the Tampico Affair on April 9, 1914, the United States sent a squadron of gunships to Veracruz. After first sending three planes aboard with the USS Birmingham, Mustin then led a second aviation detachment, along with 500 Marines, aboard the Mississippi to the campaign. They arrived at Veracruz on the evening of April 24. The occupation of Veracruz marked the first use of operational use of naval aircraft. The Mississippi began its voyage back to Pensacola on June 12 to make repairs to the aircraft which had seen continued use without means of maintenance. In July Mustin took the Mississippi to Norfolk to be sold to Greece. 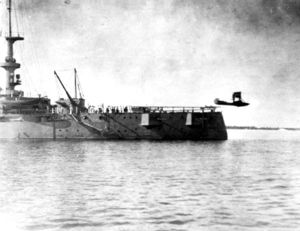 He was named commandant of the Naval Aeronautic Station in April 1915. With $1 million in funding for the year, the Station conducted antisubmarine patrols, worked on the development of a new bombsight and a gyroscopic sextant, and saw the arrival of ten new students in July. A new Station Ship, the USS North Carolina, arrived in Pensacola on September 9. On November 5, Mustin launched himself from the vessel via catapult in an AB-2.

Mustin was outspoken about the potential of Naval Aviation, despite conclusions by officials that "aeronautics does not offer a prospect of becoming the principal means of exercising compelling force against the enemy." He lobbied to halt funding of dirigible projects and focus development on high-speed fighter aircraft. However, the 1916 hurricane caused more than $1 million in damage to the base at Pensacola, and Mustin faced accusations that his "wrong flying instruction methods" had caused the deaths of Aviators Richard C. Saufley and James V. Rockwell — developments that greatly dampened plans for the Aeronautic Station. He was detached home from Pensacola on January 30, 1917, and his Naval Aviator designation revoked on January 31.

On January 15, 1918, Mustin, then executive officer of the battleship North Dakota, saved the life of a sailor who was washed overboard, earning him the Gold Life Saving Medal. However, the effort took a heavy toll on his health, from which he never entirely recovered. Mustin began development of a "sea sled" carrier vessel that year, conducting tests from November 1918 to March 1919. The armistice and end of World War I ended Mustin's sea sled development, although it would be revived during World War II and praised for its ingenuity.

In December 1919, Commander Mustin assumed command of Aroostook with additional duty as commander of the Fleet Air Detachment, Pacific Fleet. While in command of the Fleet Air Detachment, later designated the Aircraft Squadrons, Pacific Fleet, Mustin led a flight of a dozen airplanes on a record breaking 3,019 mile flight from San Diego, California, to Balboa, Panama. Mustin was ordered to report to the Navy department for duty as Assistant Chief of the Bureau of Aeronautics in late October 1921. He reported on November 6 and was promoted to Captain on January 1, 1922.

Captain Mustin was admitted to the Naval Hospital at Washington, DC, in January 1923 suffering from chest pain. After a protracted illness lasting several months, he died on August 23, 1923.