The St. Louis-San Francisco Railway Company, widely known as the "Frisco," was a major rail carrier from the late 19th century into the early 1980s. It was one of two railways that directly served the city of Pensacola, sharing access to the Port of Pensacola with its better-known counterpart, the Louisville & Nashville Railroad. It also provided passenger service to and from from Pensacola from its arrival in 1928 until the cessation of passenger service in 1955.

In the late 1800s and early 1900s the Frisco was engaged in a series of expansions. By the early 1920s many of these expansions had not proven fruitful, so new plans of expansion through acquisition and construction were developed. One of these expansion plans involved an outlet to a Port (the company having lost a line to New Orleans prior to 1920). However, most of these ventures did not pan out either and Frisco was forced to sell or abandon many them. However, one plan, the Frisco's long-standing dream of an outlet to the Gulf of Mexico, was finally realized with the completion of the line to Pensacola, Florida in July 1928.

To finalize this dream the Frisco purchased the Muscle Shoals, Birmingham and Pensacola Railroad, on July 7, 1925, although responsibility for operating the line was not assumed until a later date. This line extended from Pensacola, Florida North to Kimbrough, Alabama, a distance of about 143 miles and included port facilities consisting of docks, warehouses and water front property in Pensacola. The line, originally known as the Gulf, Florida and Alabama Railroad, was constructed in the early to mid teens of the twentieth century.

Originally this line was projected to run 146 miles south to Kimbrough, Alabama passing through rich coalfields and the city of Tuscaloosa, Alabama. As built, it left the Amory to Aberdeen Branch at a point named Aberdeen Junction on the east side of the Tombigbee River, proceeding to Demopolis, Alabama and then veering off toward the Southeast to Kimbrough. A crew change point was established at Magnolia, Alabama, which was 153.1 miles south of Amory and 150.7 miles north of Pensacola, the total length of line being 303.8 miles.

The new track was constructed with minimal curvature and grades. Flooding along the Tombigbee River was a factor to be contended with on an almost annual basis and a section of the line between Linden, Alabama and Magnolia was built on very unstable soil requiring perennial slow orders. The portion of track belonging to the Muscle Shoals, Birmingham and Pensacola Railroad was built to a lower standard with much sharper curves, lower-quality track, and steeper grades.

There were/are many chemical plants and paper mills along this line with chip and/or pulp wood loading occurring at almost every station. When operated by the Frisco, interchanges were with the Southern at Boligee, Demopolis and Kimbrough, Alabama and with the L&N at Linden, Hybart and Atmore, Alabama and Cantonment and Pensacola, Florida. The Columbus and Greenville, Southern and GM&O interchanged at Columbus, Mississippi. 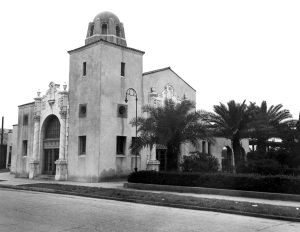 The Frisco passenger station circa 1947

There were several major branch lines serving clients in the Pensacola area. The Goulding Branch industrial park lead, which led to the port and L&N connection, crossed Palafox Street south of Fairfield Drive. A branch to the Pensacola Naval Air Station crossed Bayou Chico on a Bascule bridge, now long since demolished. This branch was formerly shared with the Pensacola Streetcar System, and long after the streetcars disappeared was known as the "Dummy Line", owing to its heritage as a non-electric tram line for Navy Yard workers, with trains pulled by so-called "steam dummy" locomotives. Another branch led to the old Frisco passenger station, a Mission Revival-style structure at the corner of Garden Street and Coyle Street, now the site of a BellSouth facility. Frisco locomotive #1355 is placed at this location in commemoration of the former passenger depot, demolished in 1967. The easement for this branch is clearly visible, parallel to and just south of Garden Street from Pace Boulevard to the former station site, crossing intervening roads with some rails still embedded. There was also a branch to the Armstrong Cork Plant, which is still in use. The Pensacola Naval Air Station and passenger station branches were mostly inactive by the early to mid 70s with the NAS branch being removed in the mid 70s.

Fire At The Frisco Docks[edit]

Frisco owned and maintained port facilities in Pensacola, on what is now called the Trillium property. The pier built shortly after 1900 was sold by the Frisco to the Pensacola Port Authority in 1957 and completely destroyed by fire on December 17, 1966. Adjacent facilities owned by the Frisco were not damaged. After that most of the import/export business was handled through the city of Pensacola Port which was served by the L&N RR. Frisco interchanged this business to the L&N in downtown Pensacola, via tracks that once paralleled Main Street. Frisco locomotives would push railcars, which would be detached and coast along these tracks until being caught by a locomotive on the port end. Scrap metal, as well as rice, flour and other agricultural commodities were exported. Commodities handled in Pensacola included scrap, chemicals, wood products and acoustical tile products.

Frisco operated several excursion trains to Pensacola in late June 1928, but regularly scheduled passenger train service did not begin until September 1, 1928. The new trains were initially Nos. 907-908, operating between Memphis and Pensacola with coaches, a dining car, and Pullman sleeping car service. Within a few years, the service was redesignated as trains 207-208, operating only between Amory and Pensacola, but with a through Pullman car and coaches carried to and from Memphis in the Sunnyland (trains 107-108). These through cars allowed passengers to board in Pensacola and awaken the next morning in Memphis, without the need of disembarking at Amory to change trains in the middle of the night. Pullman sleeping car service ended on January 29, 1934, as a result of ridership declines brought on by the Great Depression. In January 1935, sleeper service was restored with a uniquely designed car, a sleeper-buffet-coach which was operated with Frisco employees, independent of the Pullman Company. Two cars were rebuilt for this service, one named Memphis and the other named Pensacola. This sleeping car operation between Pensacola and Memphis was discontinued November 3, 1952, leaving coach only trains with RPO and baggage cars. Declining traffic caused the Frisco to discontinue Pensacola passenger service, and trains 207-208 made their last run on February 1, 1955.