From Pensapedia, the Pensacola encyclopedia
(Redirected from Battle of Santa Rosa Island)
Jump to navigation Jump to search 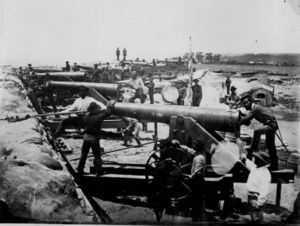 Pensacola and the surrounding area was home to several key clashes in the early stages of the American Civil War. The Confederate Secretary of the Navy, Stephen Mallory, was a Pensacolian and is buried in historic Saint Michael's Cemetery. 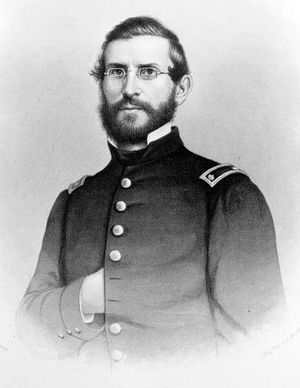 South Carolina became the first state to secede from the union on December 20, 1860. On January 8, 1861, a small group of men attached to Colonel William H. Chase's command approached Fort Barrancas but were repelled by gunfire.[2] Lt. Gilman, second in command at Pensacola, recounts the scene:

On January 10, Florida became the third state to secede. In February the seceding states would form the Confederate States of America. Shortly after Florida's secession, Lieutenant Slemmer decided to abandon Forts Barrancas and McRee and consolidate Union forces at Fort Pickens. Slemmer explained his decision as strategically necessary:

Slemmer's men destroyed over 20,000 pounds of gunpowder at Fort McRee, spiked the guns at Fort Barrancas, and evacuated 51 soldiers and 30 sailors to Fort Pickens.[3] On January 12, rebel troops from Alabama and Florida occupied the Navy Yard and Forts Barrancas and McRee; William Conway famously refused to strike the Union colors. The two Union naval ships in the harbor, Wyandotte and Supply, were commanded by officers loyal to the Union and did not fall into rebel hands. 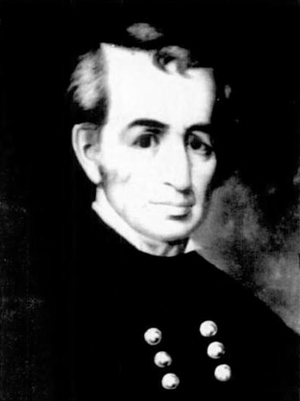 On the evening of January, Colonel William H. Chase of the Florida state troops sent a party of four men to Fort Pickens, who "demanded a peaceable surrender of [the] fort." The party was turned away.

On January 15, Chase himself came to Fort Pickens, accompanied by Captain Farrand, previously of the Union Navy. Lt. Gilman recounts a portion of the exchange between Chase and Slemmer:

Chase demanded surrender once more, by letter, on January 18, at which point Slemmer again declined. Fort Pickens would remain in Union control for the duration of the war. 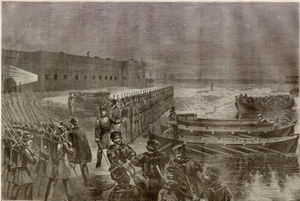 Reinforcement of Fort Pickens by the USS Brooklyn

In the early months of 1861, while James Buchanan was still President, Stephen Mallory had negotiated a gentleman's agreement that stipulated the Union would not reinforce Fort Pickens as long as rebel troops did not attempt to take it. However, incoming president Abraham Lincoln did not intend to honor the agreement, and on March 12 ordered troops about the USS Brooklyn to land at Fort Pickens. The orders reached the Brooklyn on March 31, and on April 12 the troops successfully reinforced the fort.[2] Additional troops were landed from the USS Atlantic on April 16.[3]

On March 11, 1861, Confederate general Braxton Bragg arrived in Pensacola and assumed command of the troops present. On April 19, Bragg declared martial law in Pensacola.[3] On October 22, the Confederate troops under General Bragg's command at Pensacola were organized as the Army of Pensacola.[4] 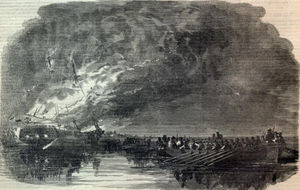 The burning of the Judah

In September 1861, a schooner called the William H. Judah, of which the Confederacy had contracted the use, ran the Union blockade and successfully entered Pensacola's harbor, docking at the navy yard. When it became apparent to Union forces that the Confederacy was attempting to outfit the Judah as a privateer, they developed a plan to sabotage the work. In the early morning hours of September 14, a Federal raiding party of about 100 sailors and marines in four small boats cast off from the USS Colorado bound for the Judah. Approaching the vessel at around 3:30 AM, they were greeted with musket fire from Confederate guards; however, the raiding party successfully boarded the Judah and set it aflame. The raiding party also managed to spike a gun battery at the navy yard before retreating. The small clash resulted in three deaths apiece on both sides, the first of the war in Florida, as well as several wounded.[3][5] 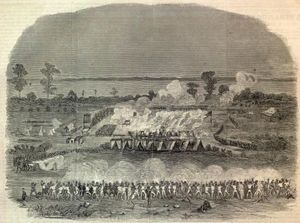 The Confederate attack on the 6th New York camp 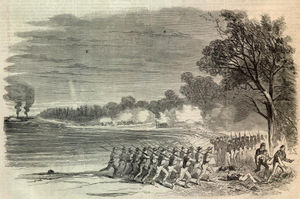 In response to the attack on the Judah, Confederate general Braxton Bragg ordered an attack on Fort Pickens. A force of over 1,000 men under general Richard H. Anderson set out from Pensacola on the evening of October 8, landing on Santa Rosa Island about four miles east of Fort Pickens. From there the Confederate troops were divided into three groups: one which travelled on the north (Sound) side of the island, one which travelled on the south (Gulf) side, and a third which trvalled just behind both, used as a flank to connect the groups. After marching for three miles, the Confederate troops were spotted by an encampment of the 6th New York Volunteer Infantry and fired upon. However, the Confederate troops had the element of surprise and quickly overwhelmed the encampment, sending the 6th New York retreating back to Fort Pickens. Soon after, though, the Confederate general Anderson decided to retreat, during which Union forces pursued and caused extensive casualties. The retreat is described in the Florida Historical Quarterly article, "Pensacola in the Civil War": 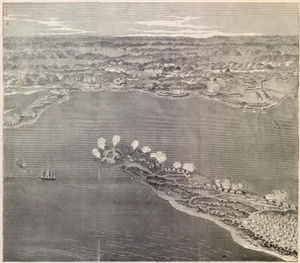 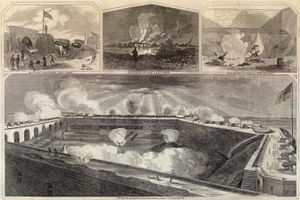 Depiction of various fortifications during the artillery exchanges

A series of artillery battles took place during late 1861 and early 1862, in which the Union guns generally prevailed, causing substantial damage to Confederate fortifications.

At 10:00 AM on the morning of November 22, the Union batteries at Fort Pickens opened fire on the Confederate steamers docked at the Navy Yard wharf. The steamers escaped the line of fire with minimal damage, but the Confederate guns returned fire. The Union ships USS Richmond and USS Niagara soon moved closer to shore and joined the Union barrage, firing primarily at Fort McRee. Union guns shot off the flagstaffs at both McRee and Fort Barrancas. Confederate general Braxton Bragg called the artillery battle "grand and sublime," and wrote that "the houses in Pensacola, ten miles off, trembled from the effect; and immense quantities of dead fish floated on the surface of the lagoon, stunned by the concussion."[6]

The artillery battle continued the next day. In all, Union troops expended 5,000 rounds of ammunition while Confederate troops returned some 1,000 shots. Fort Pickens on the Union side sustained little damage, but Confederate-held Fort McRee, its water battery, as well as the navy yard and the village of Warrington all sustained extensive damage. Federal troops did sustain two deaths and 13 wounded. Federal artillery inflicted even more damage on January 1 and 2, 1862, causing extensive fire damage at the Navy Yard and exploding the powder magazine at Fort McRee.[3]

The Union invasion of Tennessee in early 1862 necessitated Confederate reinforcement and on March 19 around 8,000 Confederate troops left Pensacola for Tennessee, leaving behind only a token force. Confederate Colonel Thomas M. Jones was left in command at Pensacola and authorized to use his own discretion concerning the evacuation of the city. Upon learning on May 7 that Union commander David Farragut's fleet was anchored off Mobile Bay, Colonel Jones quickly removed most of the Confederate artillery and supplies from Pensacola. The last Confederate troops to leave, on May 9, set fire to the remnants of the Navy Yard and other Confederate defenses. Most Pensacola residents evacuated inland to Greenville, Alabama.[6][3]

Pensacola, left in the hands of acting Mayor John Brosnaham, surrendered to U.S. troops under Lieutenant Richard Jackson on May 10. That evening, Union troops raised the stars and stripes over Plaza Ferdinand VII.[3]

Union naval officer David Dixon Porter recounted the surrender in his Incidents and Anecdotes of the Civil War:

Union forces constructed makeshift defenses near Lee Square which they called Fort McClellan. However, increased Federal activities along the Mississippi River resulted in the Union force in Pensacola dwindling to fewer than 1,000 by early 1863.[3]