The Honorable Winston Eugene "Bo" Arnow (1911-1994) was a federal judge serving in the District Court of North Florida who presided over numerous civil rights cases.

Born in 1911, Judge Arnow grew up near Gainesville, Florida. He received his a B.B.A. from the University of Florida in 1932 and a J.D. from the university's College of Law in 1933. He served as a law clerk in the Florida Supreme Court from 1934-35, then practiced law and served as a municipal judge in Gainesville (from 1940-42). After the United States entered World War II he joined the Army and became a Major in the JAG Corps. Returning to Gainesville after the war, he again served as a municipal judge (from 1946-49) then resumed his law practice.

Arnow moved to Pensacola in 1966. When a new judicial seat was created by 80 Stat. 75, President Lyndon B. Johnson nominated him to the bench on November 29, 1967. He was confirmed by the Senate and received his commission on December 7.[1] Arnow was the first federal judge to live in the city since the death of Judge William B. Sheppard in 1934.

Judge Arnow made a number of landmark civil rights decisions that affected the area. In 1969, he ordered the desegregation of the Escambia County School District. He issued the 1973 injunction against Escambia High School's use of the nickname "Rebels" and Confederate battle flag for their sports teams. In 1978 he ruled in favor of black groups to established single-member districts, which resulted in the election of African-Americans to the Pensacola City Council, Escambia County Commission and Escambia County School Board. In 1981 he sealed a settlement in a discrimination case, requiring the Air Force to establish a $2 million fund and Eglin Air Force Base to hire 100 black workers for its civilian labor force and promote others already on the payroll. Judge Lacey Collier said of these decisions, "Judge Arnow was a man who was clearly ahead of his time, and, of course, damned and vilified for it. But history has proved he was right, not just legally but also morally."[2]

Arnow also presided over the case of the Gainesville Eight, a group of Vietnam War veterans and protestors who were charged with planning an assault on the 1972 Republican National Convention. All eight defendants were ultimately acquitted by a jury. In 1985 he issued a gag order silencing the four defendants in the high-profile Christmas abortion bombings case. 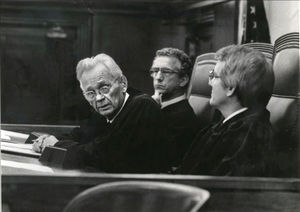 He was a friendly, soft-spoken country lawyer. Friends and colleagues regarded Judge Arnow as a southern gentleman in the traditional sense; very formal in court, yet very warm and friendly in everyday life. An avid sportsman, he was a good shooter and could frequently be found in his mint-condition green Jeep on his way to a dove hunt. … A political conservative and a strict constructionist, Judge Arnow believed firmly in the United States Constitution and followed the statutes and higher Federal Court decisions to the letter, even if he may have personally disagreed.[3]

Arnow was chief judge when he reached senior status in 1981. He continued to take jury cases until 1990 and retained chambers in the courthouse for other matters until 1993. After months of declining health, he passed away at age 83 on November 28, 1994. In 2003, the old Spanish mission-style courthouse on Palafox Street was designated the Winston E. Arnow Federal Building by Congress in his honor. The building was dedicated on May 20, 2011.