Born February 8, 1920 in Buffalo, New York, Vince Whibbs joined the Pontiac Motor Division of General Motors in 1940 while attending the University of Buffalo. During World War II he served as a fighter pilot and flight instructor with the U.S. Army Air Corps. 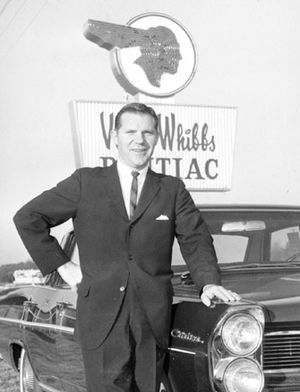 Vince Whibbs in front of the Pontiac dealership he founded.

He returned to the Pontiac Motor Division in 1946 and became a zone manager before resigning in 1958 to open Vince Whibbs Pontiac in Pensacola. Today the dealership is the Pensacola area dealer for Cadillac, Buick, Pontiac, GMC Truck and Saab. He was also the founder of Pacific Motor Co., a General Motors dealership in Taipei, Taiwan. Whibbs served as chairman of the board of AmSouth Banks of Florida and as a director of AmSouth Bank Corp. He also served on the board of directors of the Southern Company, Georgia Power Company and Gulf Power Company.

Whibbs was elected to the Pensacola City Council in 1976 and served as Mayor of Pensacola for seven consecutive terms from 1977 to 1991, making him the longest serving mayor in Pensacola's history. Under his leadership a new City Hall and police headquarters were constructed, Pensacola Regional Airport was expanded and downtown Pensacola began a redevelopment and resurgence. Upon retirement, Whibbs was formally recognized as Mayor Emeritus of the City of Pensacola, and then-Congressman Earl Hutto made a tribute to him before the U.S. Congress: "We will not forget your accomplishments and we will continue to revere you as our city's premier citizen. We share in your excitement about the days ahead. With all our love and respect, we say thank you, Mayor Whibbs. May God continue to bless you."

Whibbs is known for his commitment to public service and to the community. He served on the Board of Directors of the Pensacola Bay Area Chamber of Commerce, the Navy League, United Way of Escambia County and the Fiesta of Five Flags, in which he was crowned Don Tristan de Luna in 1986. He was on the board of trustees and served as vice president of the Naval Aviation Museum Foundation and was past president of the Pensacola Area Chamber of Commerce, Suburban Rotary Club, the Gulf Coast Council of the Boy Scouts of America and Junior Achievement. He was past chairman of the Sacred Heart Hospital Board. An honorary member of the U.S. Navy Blue Angels, Whibbs was the recipient of the Florida Bar Association Liberty Bell Award, was the Civitan Club's Citizen of the Year, was awarded the Silver Antelope for service to Scouting and was a Rotary Paul Harris Fellow. The Secretary of the Navy honored Whibbs with the Navy Superior Service Medal for his service to the Navy community.

A former member of the boards of trustees of Pensacola Junior College and the University of West Florida, Whibbs was awarded an honorary doctorate by UWF for his many years of public service. A founding member of St. Paul's Catholic Church, Whibbs was appointed by Pope John Paul II as a Knight of St. Gregory in 1995. In the final months of his life, he became a passionate advocate for the Community Maritime Park project, occupying the third principal position in the Community Maritime Park Associates group after the death of his friend, Vice Admiral Jack Fetterman.