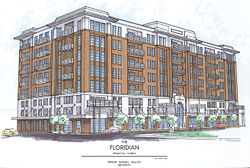 The Floridian was a proposed condominium project slated to occupy the southeast block of the Palafox and Main intersection in downtown Pensacola. It was designed by the Spencer Maxwell Bullock architectural firm and developers Adrian Lovell and Ed Carson. Sales were to be handled by John S. Carr & Company and construction by Mobile-based White-Spunner Construction.

Plans called for an eight-story building with around 60 upscale units on the top five levels. The ground level would be reserved for commercial use.[1] The units ranged in size from 790 to 2,600 square feet and in price from $260,000 to $900,000.[2] According to principal architect Brian Spencer, "The main amenity I think is the location."[3]

The 0.7-acre property at Palafox and Main was previously home to a row of buildings (including businesses Fairchild & Baniakas and the Daily Grind) that were severely damaged by Hurricane Ivan. Plans to renovate the buildings were scrapped after a fire erupted on October 10, 2004.[4] Owner George Overby, whose Overby Enterprises office was destroyed in the fire, sold the property to The Floridian's developers for $1.5 million.[3] The project was granted a zoning variance by the City's Architectural Review Board on May 19, 2005, increasing the density cap from 35 units per acre to 80 units.[3] Crews from Carson Construction demolished the ravaged damaged buildings on June 20.[5]

The condominium project was widely cited as an example of the downtown revitalization sparked by the Community Maritime Park. However, development stalled in 2007 with an overall declining trend in the housing market. As of 2008, the project had still not broken ground. The project is no longer listed as an active development by real estate team John S. Carr & Company[6], and its official website, floridiandowntown.com, is offline.