Martin "Trader Jon" Weissman (1915-2000) was the owner and namesake of the famous Trader Jon's bar in downtown Pensacola that was a fixture to naval aviators stationed at NAS Pensacola for nearly fifty years. 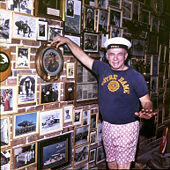 Weissman by a wall of Navy photographs

Trader was born September 1, 1915 in Brooklyn, New York to Joseph and Sadie Weissman. He trained as a U.S. Army paratrooper during World War II, but broke his ankle in the last training jump before his scheduled deployment to Europe. The injury left him permanently bowlegged; Weissman was honorably discharged, but he retained a love of the military and aviation.

In 1953, Trader and his wife Jackii moved to Pensacola from South Florida and opened the bar at 511 South Palafox Street in an historic brick building from 1896 — now best known as the Trader Jon's building. It quickly became a favorite hangout for the U.S. Navy and Marine Corps officers stationed at Naval Air Station Pensacola.

Weissman was known for his eccentricities. His frequently ridiculous outfits included mismatched socks, and he offered a reward to any patron who caught him in a matching pair. Prices for drinks were not generally set and could vary by day and by customer. He also traded drinks for bits of Navy memorabilia, quickly amassing an impressive collection, that he hung on the walls or from a giant fishing net that covered the ceiling. Trader was often heard exclaiming a word that became his catchphrase: "Bee-you-tee-ful!"

On September 25, 1997, Weissman was stricken by a severe stroke and taken to Sacred Heart Hospital. The stroke left him partly paralyzed and unable to return to the bar, which operated intermittently for several months before closing in 1998.

He died at Sacred Heart Hospital on February 18, 2000 and was buried with full military honors at Barrancas National Cemetery.