General John Campbell, of Strachur (1727-1806) was a Scottish soldier and minor nobleman who commanded the military at British Pensacola, including their defeat to Spanish forces in the Siege of Pensacola. He later succeeded Guy Carleton as commander-in-chief of North America in 1783.[1]

Campbell inherited his title (17th of Strachur) upon the death of his father Admiral John Campbell and was a direct descendant of a branch of Clan Campbell.

Born in 1727, John Campbell (17th of Strachur) was appointed lieutenant in John Campbell's Highlanders in June 1745.

The young John Campbell showed his military prowess during the Jacobite Rising of 1745 and served in the British Army throughout the rising of 1745-1746, including the Battle of Culloden. He made the campaign in Flanders in 1747, in which year he became a Captain and at the peace of 1748 went on half pay.

In 1756, he was called into active service and joined the 42nd (Royal Highland) Regiment of Foot (also known as the Black Watch Regiment) and served under James Wolfe.

He was wounded at Fort Ticonderoga, New York, during the Battle of Carillon in the French and Indian War and, on his recovery, was appointed Major of the King's 17th Regiment of Foot. In February 1762, he became a lieutenant colonel and commanded the King's 17th Regiment in the expedition against Martinique and Havana. He became lieutenant colonel of the King's Wikipedia:57th Regiment of Foot on May 1, 1773, and returned to North America on the eve of the outbreak of the American Revolution. Campbell was based in Boston under the command of General Thomas Gage.

Although not directly involved in the infamous march in April 1775 to Lexington and Concord to capture Samuel Adams and John Hancock, Campbell was part of Lord Percy's brigade sent to help reinforce the British troops, whose presence had been made known by Paul Revere, in the American hinterland. After the defeat at Bunker Hill in June 1775 he was sent on the New York expedition with Sir William Howe.

After Sir William Howe's successful Battle of Long Island and capture of New York City, John Campbell was based in New York City until autumn of 1778. While living there he was stationed at Fort Clinton and recorded as attending St. Paul's Chapel.

In October 1778 John Campbell, recently appointed brigadier general, received a communication from Lord George Germain to proceed from the colony of New York to Pensacola on the frontier of British North America in the Province of West Florida and take command of His Majesty's troops. 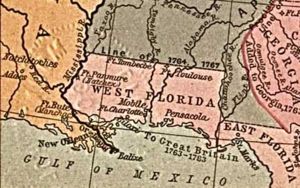 The expanded West Florida territory in 1767.

The state of affairs that awaited John Campbell in West Florida were severely deficient. In January 1779, Campbell sent a report describing the conditions in Pensacola as "the most disagreeable, the most irksome, the most distressing of all situations" he had ever encountered. He found himself:

Campbell immediately set out to improve the situation and began to construct a fort on the Mississippi River by September 1779.

General John Campbell brought a detachment of Royal Artillery, the 3rd Regiment of Waldeck and two Provincial North American Loyalist Corps (the Pennsylvania and the Maryland Loyalists) from New York to reinforce the garrison at Pensacola. In addition to the 16th and the 60th Regiments, Governor Peter Chester of West Florida had organised three independent companies of troops. Additional troops had been raised by Colonel John Stuart, Superintendent of Indian Affairs in the Southern District, who before the arrival of General John Campbell, was acting under instructions from General Sir William Howe. Campbell also requested of General Sir Henry Clinton a company of Negroes which was under Clinton's command, and later urged his commander-in-chief to send English troops to West Florida. With the increasing number of troops came added difficulties: the problems of adequate quarters and sufficient provisions. Meeting these demands gave General John Campbell much concern. Payment of the troops was in arrears since October 1778 and only small paper notes had been issued for money.

On February 19, 1779, Campbell was appointed major general. A month later, on March 22, he was given complete authority over all troops in the Province of West Florida.

The proper defense of the West Florida province was the sine qua non of General John Campbell's mission. No adequate defense of the province could be realized until the neglected harbors of Pensacola and Mobile were strengthened. Pensacola did not have the protection of even one frigate and there was not a single gun mounted to prevent any enemy forces from entering the harbor. The harbor of Mobile was totally unprotected and a scene of ruin and desolation. Campbell estimated 50,000 pounds sterling could not restore Fort Charlotte to an acceptable state.

The acuteness of conditions in West Florida prodded Lord Germain to action - supplies and provisions had left England in January 1779 in a convoy for Pensacola via Jamaica. Following John Stuart's death, Alexander Cameron had been appointed Superintendent of Indian affairs in the Southwest, and was to be under the commander-in-chief, General Clinton. Cameron was to follow General Campbell's orders. In April 1779 Campbell reported to Germain the progress of the numerous activities under his supervision.

When Campbell had arrived in Pensacola, there were sealed orders from Lord Germain instructing him to "avoid disputes with, or giving occasions of Offense to the Subjects of Spain." As a measure to this end, Campbell took the "earliest opportunity" to write to Don Bernardo de Gálvez, then acting governor of Louisiana, to convey his "Ardent wish and Desire to promote and encourage a good understanding between the subjects of their Catholic and Britannic Majestys." Gálvez had responded with assurances of the "Friendship and good harmony observed by our respective nations."[2]

A few months later, on June 21, Spain declared war on England. On June 25, a letter from London marked secret and confidential, went to General John Campbell at Pensacola from King George III and Lord Germain. Campbell was instructed that it was the object of greatest importance to organize an attack upon New Orleans. If Campbell thought it was possible to reduce the Spanish fort at New Orleans, he was ordered to proceed immediately to make preparations. These preparations included: (1) secure from Vice-Admiral Sir Peter Parker as many armed vessels as could be spared from Jamaica, (2) collect all forces which could be drawn together in the province, (3) take as many faithful Indians as the Superintendent could supply, (4) draw on the Lords Commissioners of the Treasury for all expenses.

As an unfortunate twist of fate, this secret communication fell into the hands of Governor Galvez at New Orleans although ultimately reached General John Campbell afterwards.

After reading the communication from King George III and Germain, Gálvez swiftly and secretly organised Louisiana and New Orleans for war. The independence of the United States of America was publicly recognised in New Orleans in August 1779.

On September 11, 1779, the Spanish and their Indian allies marched against the English forts on the lower Mississippi (Fort Bute and Fort New Richmond at Baton Rouge). So successful were they that they nearly destroyed the western part of West Florida before General Campbell at Pensacola had the slightest communication of Gálvez having commenced hostilities.

On September 14, 1779, Campbell was ready to embark with five vessels and two flatboats and with five hundred men, ample provisions, and a large supply of gifts for the Indians. He was proceeding to the attack of New Orleans when news arrived of Galvez's attack on the Mississippi. Personally, Governor Chester was indifferent in his conduct to Campbell for the defense of West Florida and would not proceed beyond the strict and most limited Construction of the Law to save West Florida. With the loss of the Mississippi area, General Campbell and Lord Germain, quite naturally, centred their attention on the defence of the eastern part of the province. The proper management of the Indians was of greater significance than ever. Efforts were made by General Campbell to negotiate with the Chickasaws with the Cherokees and Creeks to act jointly on behalf of the English.

The very day in which Campbell informed Clinton of the latest developments in West Florida, the Spanish were approaching Fort Charlotte and Mobile. On March 14, 1780, Fort Charlotte and Mobile (under Captain Elias Durnford) capitulated to Spanish forces. General John Campbell had left Pensacola with reinforcements on March 5, but heavy rains, swollen streams and muddy roads had retarded their progress. When his scouts reported the display of Spanish colours over the fort, General John Campbell began his homeward trek. The troops returned to Pensacola on March 18. With the surrender of Mobile, West Florida was reduced to the District of Pensacola alone. Unless Pensacola was relieved by a naval reinforcement from Jamaica, Pensacola would be lost. "One single Frigate," lamented Campbell to Germain, "would have prevented our disaster at Mobile."

While Governor Galvez was preparing for his advance against the English at Pensacola, the rivalry between Governor Chester and General John Campbell flared up again because the governor sought to restrict General John Campbell's authority over the troops. General John Campbell predicted a Spanish attack in early fall 1780 but it didn't come. In January 1781, tired of waiting for the Spanish to assume the initiative, Campbell sent Colonel J. L. W. Von Hanxleden with more than 500 men to seize Mobile. The attack was unsuccessful and resulted in the death of Colonel Von Hanxleden.

Early in March 1781 the long awaited Spanish attack on Pensacola was begun. On the afternoon of March 11 Gálvez' ships were at the entrance of Pensacola Bay already having taken control of Santa Rosa Island. On March 21, Campbell made a humane proposal to Governor Gálvez that the town and Garrison of Pensacola shall be preserved. Unfortunately, in the night, before the Spanish Commander replied officially, one of the British officers in charge of a fort burned several houses. Whether or not this act was committed with the knowledge of General Campbell is not known, but it gave Gálvez grounds for accusing the British commander of insincerity.

General Campbell compelled his troops to cling to the sturdy defenses of Fort George. However, without naval protection nor adequate artillery to engage a counter assault, their defenses were limited. Spanish artillery fire breached the ramparts of the Queen's Redoubt on May 8, striking a powder magazine. With their own redoubt now occupied by the more numerous siege forces, Campbell surrendered Fort George and Pensacola to the Spaniards on May 10.

With the loss of West Florida, the Americans swiftly put pressure on the remaining British troops in North America at the Siege of Yorktown.

After returning from West Florida General John Campbell remained in British held New York City until the British left under the Treaty of Paris on Evacuation Day, November 25, 1783.

In 1783, he superseded Sir Guy Carleton as Commander-in-Chief. General Campbell served as Commander in Chief for British North American forces in New Brunswick, Nova Scotia and Quebec in Canada until 1787.

He returned to Scotland, in 1787, where as clan chief of the Campbells of Strachur he established Strachur House.

Later in life John Campbell lamented his posting to West Florida with much feeling: