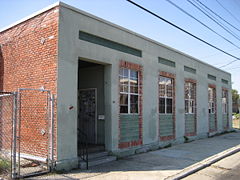 The HandleBar was a nightclub located at 319 North Tarragona Street that dates back to the early 1980s. Owned by Sue and Jimmy Lamar III, it was often described as a "hole-in-the-wall bar,"[1] and "the closest thing Pensacola has to a true CBGB-style dive."[2] It was a popular venue for local and regional bands from the area's punk rock and underground music scene. In November 2018 the bar suddenly, and permanently closed.

Founded circa 1983 by Lee Mabes, Tom Pilcher and Jim Ward,[3] the bar became the sole venue for New Wave music after the close of McGuigan's. As Pensacola News Journal reporter Troy Moon recalled:

Local bands such as the Names, Congo Rebellion, and the Beach Monkees would fill the club in those early days, sending menacing volleys of punked-up power pop and drone-filled noise through the club's musty air. Folks with wacky-colored hair and black leather jackets would pogo and sweat to tunes that recalled the Velvet Underground, Big Star and the Ramones, while seizure-inducing strobe lights lit the surreal scene.

And the national acts came, too: Future Rock and Roll Hall of Famer the Replacements played its first Pensacola gig at The HandleBar on the same night in 1985 when Kiss opened up the Pensacola Civic Center just a par five or so away. Hundreds of Pensacola punks and metalheads slam-danced through a sledgehammer-hard set by Suicidal Tendencies at the height of that band's popularity. Black Flag - hardcore punk's seminal band - slung sweat and rebellion at a crowd of hundreds, literally shaking the club's walls with its fierce volume. Then there was the early Dash Rip Rock gig, where the drummer pulled half his drum set outside and played on the railroad tracks, half the crowd following him, as the rest of the band played from the stage.[4]

The bar closed for a few years in the late-80s, and the building was occupied briefly by Sluggo's before moving to its Intendencia Street location. The Lamar family reopened the bar around 1991. In November 2018 the bar permanently closed, with the building going up for sale.

In the early morning hours of April 11, 2001, a fire gutted the HandleBar's historic brick building. The fire was classified as "suspicious" by the Bureau of Alcohol Tobacco and Firearms, but the cause was never determined.[5] The insurance payment the Lamars received did not cover the cost to rebuild, and they initially had trouble with financing before getting a loan from Peoples First Community Bank as well as long time patron Lowell Husband Seville Quarter and Subterranean Books held fundraisers to benefit the effort, and others volunteered labor and materials: a beer cooler from Bobby D's, flooring from Florida Tile, architectural design by George Koper Associates, marble salvaged from the Hotel San Carlos, and a custom deadhead cypress bar built by local legend, Bob Burns[4]. It reopened twenty months later with Lowell Husband as a new co owner on December 21, 2002. Previously partitioned into three separate rooms, the building now has no interior walls.