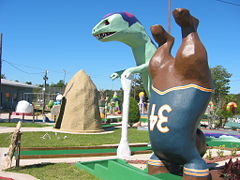 "T-Rex" and "Da Bear" sculptures, with clubhouse on left

Goofy Golf is a miniature golf course located at 3924 Navy Boulevard. It is known for its distinctive cement sculptures that provide a theme to each of the 36 holes. Dating back to 1958, the Pensacola Goofy Golf was one of several established by Lee Koplin along the Gulf Coast.

The original owners leased Goofy Golf to a local Pensacola family in 2001. They ran it as a family business until Hurricane Ivan hit in 2004. This caused extensive damage that was too costly to repair. Some of the damages included ripped batting cage nets, the ostrich on the windmill hole was blown down, the fence was folded over from the high winds. Due to the cost of the damages, the family was forced to let the course close.

After closing in 2004, the Goofy Golf property was occupied briefly in 2005 by the Daily Grind, an Internet café and music venue, after their previous location was damaged by Hurricane Ivan. The Daily Grind closed in 2006, and management reopened as Goofy Golf on April 1, 2007. In addition to miniature golf, a batting cage facility is located on the rear of the property, and a snack bar and pool tables are located in the clubhouse.

Goofy Golf was opened in 1958 by Lee Koplin, who had founded the original Goofy Golf in Biloxi, Mississippi the previous year. Koplin built similar courses over the next year in Fort Walton Beach and Panama City, the latter of which is considered his masterpiece.[1] A round of golf cost only 35 cents.[2] Additional holes were added circa 1978 with statues from a competing "Sir Goony's" minigolf course.[1] The clubhouse was built in 1964 and was expanded in 1991.[3]

The business closed in (date needed), and the property sat unused. Jeremy Marsh, owner of the Daily Grind Internet café and music venue, bought the Goofy Golf location on June 17, 2005, after their previous location was severely damaged during Hurricane Ivan.[4]

The outdoor attractions were closed during the Daily Grind period, but interest remained high. "Every day, I had customers asking me about it. Everyone here (at the Daily Grind) either wanted to play golf or use the batting cages," Marsh said.[5]

Citing "inconsistencies [sic] in business",[6] the Daily Grind owners decided to close the coffeehouse on October 28, 2006. They repaired and replaced a number of the statues that were damaged by Hurricane Ivan and reopened Goofy Golf on April 1, 2007. On August 23, 2010 ownership was taken over by, Jay Grant and management was taken by Jacquline Parizo. Goofy Golf continues to grow everyday even after 52 yrs of service to Pensacola.

Goofy Golf is now owned by The First Tee of Northwest Florida. They have opened Goofy Golf open to the public, see Goofy Golf Facebook for hours.

Goofy Golf has two 18-hole courses, both of which are considered par 42. The 18th holes of both courses are forced par 1; a hole in one wins a free game redeemable at any time; all others are returned to the clubhouse, marking the end of the round. Some of the holes were changed when the coarse was purchased as The Daily Grind. For ex. The Shrek hole was originally The Purple People Eater, Grandmother's House was originaly the School House, and The Knight had ghost figures and was called Ghost Town. The Hollywood hole did not have the Hollywood sign on it and was called "The Confusion Hole" due to its large number of holes that lead to two different outcomes.

We have two eighteen hole courses. Prices: 4yrs and above $5.00 for one course $8.00 for both courses 3yrs and under free