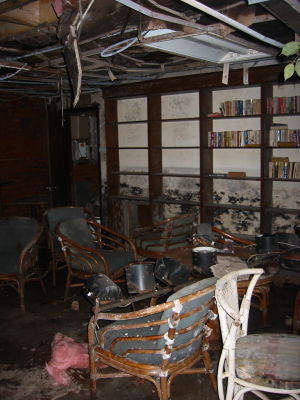 Joe -- The Daily Grind only occupied the site in around 2005 after Hurricane Ivan trashed their former location on Palafox just north of Main (506 S Palafox). The grave refers to the shop's whole existence, not its existence at the Goofy Golf property. dcosson ··· talk 13:07, 14 July 2007 (CDT)

Aha! Were they in the old Secret Café building? That explains why I had no memory of them in the Goofy Golf site for many of those years, and also why the Property Appraiser's records show a change of ownership in 2005. Thanks! --Admin 13:13, 14 July 2007 (CDT)

No problem... I'm not familiar with Secret Cafe... The old Daily Grind was in a building on the East Side of Palafox just north of Main. See this article for more background on the move. dcosson ··· talk 13:33, 14 July 2007 (CDT)

Yeah, that was the place. Just south of Main, I think you mean. The Secret Cafe was a haunt in my high school days. I remember peeking around inside after Ivan, before they bulldozed the whole block to make way for the yet-unbuilt Floridian. I took some pictures if you ever want to write a Daily Grind article. --Admin 19:36, 14 July 2007 (CDT)

I will get in touch with Jay and point him to this site when I get a chance to flesh out the prices, hours, and whathaveyou. —Preceding unsigned comment added by KB (talk • contribs) 22:05, 7 December 2007