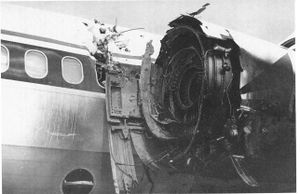 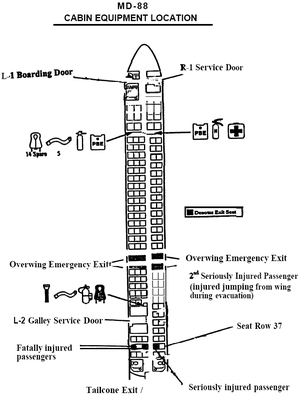 Delta Air Lines Flight 1288 was a regularly scheduled flight from Pensacola Regional Airport to Atlanta's Hartsfield-Jackson Airport on a McDonnell-Douglas MD-88 equipped with Pratt & Whitney JT8D-219 turbofan engines. During the flight's takeoff roll from runway 17 at Pensacola on July 6, 1996, the aircraft experienced an uncontained, catastrophic turbine engine failure that caused debris from the front compressor hub of the number one left engine to penetrate the left aft fuselage. The impact left two passengers dead and two severely injured. The pilot aborted takeoff and the airplane stopped on the runway. Three other passengers sustained minor injuries during the emergency evacuation. Most of the passengers were traveling on vacation.[1]

During the pre-flight investigation, the First Officer noted a few drops of oil coming from the "bullet" or tip of the number one (left) engine, although it was said to be "not that serious". The First Officer also noticed a couple of missing rivets on the left wing. The Pilot told NTSB investigators that both problems were observed as non threatening and that the aircraft was airworthy, therefore maintenance was not informed.[2]

At 2:23PM CDT Delta Flight 1288 was cleared for takeoff on Runway 17. As the First Officer was advancing the throttles and reaching an airspeed of 40 knots, the cockpit lost lighting and instrumentation. The rear cabin passengers and flight crew heard a very loud bang and experienced a blast-like sensation. The pilot then abandoned takeoff by bringing the throttle to idle and engaging the brake which brought the aircraft to an eventual stop without use of reversers or spoilers.[2] Anita S. Saxton and 12 year-old Nolan Saxton sustained fatal injuries; 15 year-old Derrick Saxton and 9 year-old Spencer Saxton were listed in "Good Condition" at Sacred Heart Hospital on July 7, 1996.[1]

Once the aircraft stopped the First Officer attempted to contact the tower, however was unable due to the cockpit's lack of power. The flight crew then activated emergency power contacting Pensacola tower and declaring an emergency. The cockpit's jump-seat passenger, an off-duty Delta Boeing 767 pilot, went to inspect the rear of the aircraft. When the First Officer saw the over-wing exits open and about half of the passengers missing along with engine noise, he returned to the cockpit and advised the captain to kill the engines. At 2:27PM CDT the pilot requested emergency medical assistance due to the jump-seat passenger's report of a large hole in the fuselage, engine debris throughout the cabin, and injured passengers. He then reported there was no evidence of smoke or fire in the cabin, and that the rear cabin door had been opened and the emergency slide was inflated. The flight attendant who initiated the evacuation through that door told NTSB that she saw fire on the left engine therefore abandoned evacuation through that door and directed passengers forward. She reported that there were many injuries and possibly two dead, therefore she began to evacuate the plane until she was stopped by the First Officer. Due to the damage to and danger at the rear of the aircraft, the air stairs built into the MD-88 were found unsuitable to use. The captain then requested for portable air stairs to deplane passengers which arrived 25 minutes later.[2]

After a total investigation, the NTSB determined the most probable cause of the accident was a fracture in the left engine's front compressor fan hub, which resulted from failure of the airline's Fluorescent Penetrant inspection process to detect a potentially dangerous crack in the fan which originated from the engine's initial manufacture. The NTSB also attributed the accident to the failure of Delta's maintenance team to discover the problem. There were confirmed two severe injuries and two fatalities.[2]

As of April 2009 Flight 1288 no longer designates the Delta Pensacola-Atlanta (PNS-ATL) route, but now designates a Seattle-Cincinnati/Northern Kentucky International Airport (SEA-CVG) flight. The aircraft involved in the incident is still in service with Delta and still registered as N927DA.