Admiral Mason Park is a 5.5-acre City of Pensacola park located in the Hawkshaw area along Pensacola Bay, at the intersection of 9th Avenue and Bayfront Parkway.

From 1956 to 1974 it was the site of a baseball stadium also called Admiral Mason Park. The ballpark was named in honor of Charles P. Mason, a Vice Admiral in the United States Navy and two-time Mayor of Pensacola. After the stadium was demolished, the land was partitioned to create the adjacent Veterans Memorial Park. The remaining space was later redeveloped as a landscaped park which continues to bear Mason's name. 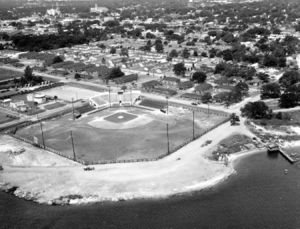 Admiral Mason Park was a 2,000-seat baseball stadium situated on the waterfront site with the address 100 South 9th Avenue. The park is best remembered as the home of various Pensacola-based minor league baseball teams including the Dons and Senators. The Dons were owned by Fred Davis and started playing at the park in 1957.[1] The team became the Senators, after major league affiliate the Washington Senators, in 1961. The park was a popular destination, but odors from the nearby 9th Avenue Wastewater Treatment Plant prompted the nickname "Stinko Stadium" from some patrons.[2] After the league folded in 1962 for refusing to accept black players, Admiral Mason Park languished for more than a decade before ultimately being demolished in 1974.

In January 1991 the City of Pensacola appropriated 5.5 acres of the former stadium's site for the planned "Wall South" memorial, a half-scale replica of the Vietnam Veterans Memorial in Washington, D.C. While the city retains ownership of the land, park maintenance and day-to-day operations are wholly the responsibility of Vietnam Veterans of Northwest Florida. This site has since become known as Veterans Memorial Park and is now home to several other monuments.

Derelict and standing in the path of planned Shoreline Drive (which would become Bayfront Parkway), the city-owned Admiral Mason Park baseball stadium was condemned in 1970 and demolition began on July 10, 1974.[3]

The low-lying area where Admiral Mason Park is located was denoted a swamp on old city maps and remains vulnerable to flooding during heavy rainstorms. It sits at the topographical foot of East Hill and serves as a drainage basin for approximately 18 acres of surrounding area. During the construction of the Aragon neighborhood, a modern drainage system was engineered that alleviated flooding by depositing untreated stormwater directly into Pensacola Bay.[4] However, this runoff potentially contains lawn chemicals, automotive fluids and other toxins, presenting an environmental hazard to both the Bay and Project GreenShores. Future developments in the area threaten to exacerbate the situation.

In 2000 a debate erupted over whether to use the site as a dedicated soccer stadium or a stormwater retention pond. In his 2001 campaign for the City Council, Marty Donovan was a strong proponent of converting the park to a pond: "It used to be a freshwater swamp. It's an ideal place for a lake. It's inconceivable to me that a city that says it's concerned about stormwater pollution wouldn't be 110 percent behind this project."[5] However, faced with cost estimates of $450,000 and without expected grants from the state DEP, the Council demurred.[6] 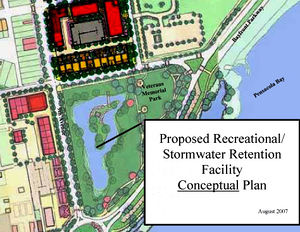 In 2007, the developers of the Hawkshaw Village project offered to construct a drainage pond at Admiral Mason Park that would provide stormwater retention and treatment to a 40-acre area, including the project's site at 9th and Romana and the proposed technology park north of Aragon. The pond would have included a water feature, similar to Lake Ella in Tallahassee. Construction was estimated to cost $690,000, and developers had pledged an additional $300,000 in landscaping and amenities to make the location more attractive.[7] However, the project was ultimately scrapped, with the Hawkshaw developers citing a poor economy and a failure by the Chamber of Commerce to fund a portion of the wet retention.[8]