Difference between revisions of "Celebrate Pensacola"

Celebrate Pensacola, Inc. is a non-profit organization that is organizing a festival commemorating the 450th anniversary of Don Tristan de Luna's 1559 expedition that established Pensacola as the first European settlement in the United States. The celebration will run for a total of for 450 days, from May 23, 2008 to August 15, 2009. Among other events, Pensacola received a visit by Spanish royalty on February 19, 2009.

The organization will come together again in 2014 to celebrate the 100th anniversary of Naval aviation in Pensacola. 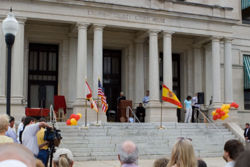 Among the initiatives planned by Celebrate Pensacola was a proposed statue of Tristan de Luna to be erected in the City's recently finished Plaza de Luna park at the southern terminus of Palafox Street. The statue would feature a 9-foot sculpture of de Luna atop a 44-foot pedestal. (The idea had first been proposed by the Fiesta of Five Flags organization in 2002.[2]) Event planners initially hoped the City of Pensacola would contribute $150,000 of the $700,000 cost, but the City Council demurred by a 5-4 vote, citing budget restraints.[3]