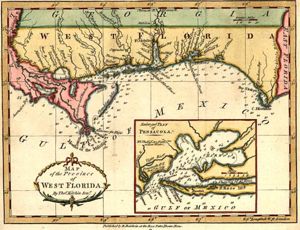 Spanish West Florida contained the portions of present-day Louisiana, Mississippi, Alabama, and Florida south of the 31st parallel north, bounded on the west by the Mississippi River and Lake Pontchartrain, on the east by the Apalachicola River, and by the Gulf of Mexico to the south.

After the Louisiana Purchase, the United States claimed the portions of Spanish West Florida from the Mississippi River eastward to the Perdido River, just west of Pensacola. Spain contended that its territory extended west to the Mississippi River. This caused tension between the two nations, and led to increasingly frequent incursions into the territory by the United States Army, under Andrew Jackson and others. The status of the disputed area was not fully resolved until Spain ceded it, along with the rest of the Floridas, to the United States in 1819.