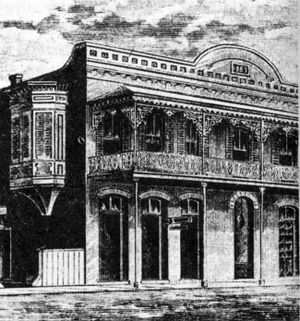 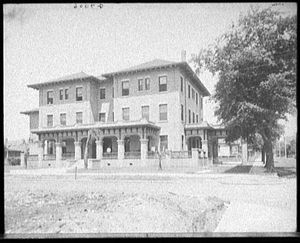 The Osceola Club was a Pensacola social club in the late-nineteenth and early-twentieth centuries. Organized as the Reading and Social Club[1] in August 1872,[2] it changed its name to the Osceola Club in 1878 and was headquartered in at least two buildings during its existence.

The first, located at 21 1/2 South Palafox Street, was built in 1883[3] and can be seen in the Wellge map of 1885. It was a two-story structure with iron balconies and distinctive turrets.

This building was destroyed in (and believed to be the source of) the Halloween Night Fire of 1905.[4]

The club continued its operations at a second building at the corner of Garden and Baylen Streets.[5] The new building was a three-story structure in the modernist style, similar to contemporary structures like the San Carlos Hotel and Pensacola YMCA.