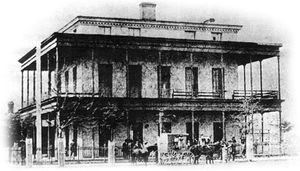 The old custom house, without the third floor balcony

The Old Custom House, built in 1854, was the first building in Pensacola constructed for U.S. government administration. It was located at the northwest corner of Palafox and Government Streets (the current site of the Escambia County Courthouse).

Pensacola had been transferred from Spain to the United States in 1821, and more than thirty years passed without any location in which the federal government could operate. The site for the custom house was chosen in the early 1850s, but was already occupied by a department store owned by William Kaiser. The matter went to court, and Kaiser, who did not have legal claim to the land, lost. The store was razed.

The custom house was completed in 1854 for a cost of $60,000, which was considered high at the time. It was three stories tall, of wood construction, with a covered wrap-around balcony on the second floor. (Another balcony and roof was added to the third floor by 1877.)

The building was destroyed in the great fire of December 11, 1880.