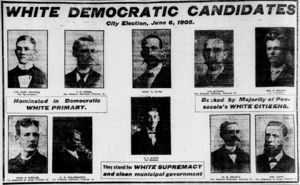 A municipal election was held on June 6, 1905, to select officials of the City of Pensacola. The election was a "clean sweep" for the new White Democratic Party, whose candidates were elected in an April 4 primary and advocated white supremacy in municipal government.