He came under fire in 2007 for posting controversial comments on the pnj.com message boards under the pseudonym Godzilla. His identity was revealed against his wishes in a News Journal story, which cited the website's registration database as proof, sparking discussions of both political and journalistic ethics. "Off the record" conversations between Bergosh and PNJ reporter Sara Rabb were also leaked in the "outing" of Bergosh. This conduct was rebuked in a subsequent media article on the topic. "[1]

Bergosh and his wife Sally have three children: Tori, Nicholas and Brandon.

Bergosh is a 1986 graduate of Pensacola High School. After high school, he moved out west to attend college, earning an Associates of Arts degree from Grossmont College (El Cajon, California) in 1990 and a B.A. from San Diego State University in 1994. Bergosh has earned a Master of Science in Administration from the University of West Florida. Before entering politics, Bergosh had a ten-year career as a retail business operator and facilities management specialist, including about 1 1/2 years working at Naval Air Station Pensacola.[2] When his brother decided not to seek reelection, Bergosh said he was asked by Superintendent Jim Paul to seek the office.[2] He was elected on September 5, 2006 with 5,110 votes — about twice as many as his closest rival, Todd Leonard.[3]

Initiatives and Projects Implemented as School Board Member-2006-2016[edit]

--implementation of a Fraud, Waste, and Abuse Hotline-Independently run by a unbiased third party. --District-run health clinic November, 2010. This first of its kind in Escambia County Schools employee health clinic was opened in June of 2013 --Implementation of a multi-faceted Drug Eradication Strategy--this includes canine searches and drug testing students that participate in extracurricular activities. --Video Recording of all workshops and meetings of the School Board --School Board "web-presence" on the district's new web page. After a 16 month series of delays, the School Board's web page was put up in 2011 to increase transparency. --Addition of a Safe Harbor Provision in the District Rights and Responsibilities Handbook, as a balance to zero tolerance. This initiative to provide students and parents an additional layer of due process protections was implemented over extensive protests by district staff and administrators -- Participation of the Escambia County School District in the MAP (Merit Award Program), a statewide teacher performance pay program to reward great teachers and grow student achievement. --Expansion of music programs at the secondary level, with the addition of a new High School Band at West Florida High School beginning in the 2010-2011 school year. --Initiation of the Establishment of a University Lab School in Partnership with the University of West Florida. School opened 2010-2011 school year. --Acceleration of closure and consolidation process to correct district inefficiencies.

On October 4, 2007, the Pensacola News Journal published an article by reporter Sara Rabb that revealed Bergosh had been posting comments on the pnj.com forums under the pseudonym "Godzilla." Rabb purportedly noticed that "Godzilla's" posts were similar to the views expressed by Bergosh at School Board meetings, and she was able to confirm with the website's administrator that Bergosh's personal email address had indeed been used to register the account. Rabb requested an interview with Bergosh on October 2, 2007, to discuss teacher salaries and merit pay. At the interview, Rabb confronted Bergosh with her findings and indicated that the News Journal wanted to run a story on the pseudonym. Bergosh admitted he was Godzilla during the interview, but then issued an official statement "unequivocally denying" the alter-ego.[4] He has claimed this initial admission was made to Rabb "off the record."[5] Bergosh officially confirmed the online identity during an October 8 "IN Your Head Radio" interview on AM 1620.[6]

Bergosh was criticized in subsequent News Journal editorials for a number of the comments he made as Godzilla, which included:

Bergosh accused the News Journal of "outing" his identity on what he had believed was a safe outlet for anonymous opinion: "When the Pensacola News Journal created an anonymous forum, encouraging the use of pseudonyms, as to let people take down their guards and speaking in a frank manner regarding political ideas and thoughts, I jumped at the opportunity."[8] The publication pointed out that their website's current terms of use reserved "the right to identify you as the author of any of your postings or submissions by name, email address or screen name, as we deem appropriate,"[9] although this policy may have been altered since Bergosh initially registered.[citation needed] Bergosh asserted that he "never divulged any 'in-house' secrets or committed ANY crime" and that the left-leaning newspaper had engaged in "yellow journalism" as retribution for his conservative opinions, prompting him to "fight for my right to freedom of speech."[8] 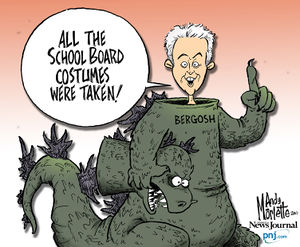 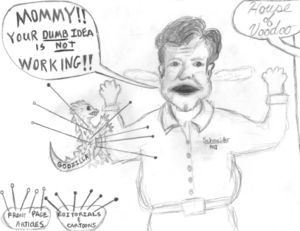 The News Journal's decision to share details of their website registration database with the editorial staff was criticized by many members of the pnj.com forums and by other publications. According to the UWF Voyager, "A bias was inherent in that story — the bias to sell more newspapers."[10] The online editor for the Northwest Florida Daily News decried the exposé as "bush league."[11]

Hostilities continued when the News Journal held a contest asking readers to submit captions for a cartoon of Bergosh wearing a Godzilla costume. (The winning caption said, "All the School Board costumes were taken!"[12]) Bergosh countered by offering alternate captions critical of the newspaper's online policy (for example, "Deception is at the core of 'anonymous' blogs!!"[13]) and drawing a caricature of editor Dick Schneider:

These PNJ guys have had me on the front page twice, 4 editorials, and the “cartoon” has been up for 2 weeks!! These guys have given me more coverage this last month than Hillary Clinton, Barack Obama, or their #1 hero, Al Gore, inventor of the internet and recent Nobel Peace Prize winner!! What a strange October this has been!! … So I put together my own little “cartoon contest”— knowing I have nowhere near the resources, time, nor the “need” to create news at the level of the PNJ. But, this is still rather humorous, in my opinion. I asked around town, at the Waterfront Rescue Mission, at UWF, At Happy Hour, and at my Mensa club meeting-- and came up with quite a few ideas for the caption, with the one in the final cartoon being deemed “the winner.”[14]

His cartoon depicted Schneider outside a "House of Voodoo" sticking pins into a Godzilla doll and yelling, "MOMMY!! Your dumb idea is not WORKING!!"