From Pensapedia, the Pensacola encyclopedia
(Redirected from UWF)
Jump to navigation Jump to search

The University of West Florida is a mid-sized public university, located in Pensacola, it is a member institution of the State University System of Florida. UWF is a Doctoral/Research university, specializing in engineering and the humanities. It is a space-grant institution that was established in 1955, sitting on the third largest campus in the Florida University System, 1600 acres. The UWF main campus is a wildlife refuge that is bordered by two rivers and Escambia Bay. The University of West Florida is an exceptionally progressive university in terms of technology and environmental policy, as exemplified by their investment in the new Science and Engineering building, the BEST house and their investments in solar powered student housing. UWF is known for its small class sizes and its intimate, private school like educational atmosphere, which distinguishes it from the larger universities in the Florida SUS. The university's mascot is an Argonaut, and the school's logo is the Chambered Nautilus.

School of Science and Engineering[edit] 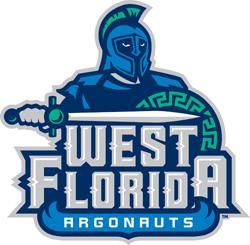 UWF's official mascot is the Argonaut, a mythical group of Greek sailors, who accompanied Jason to Colchis in his quest for the Golden Fleece.

The official logo of the institution is the Chambered Nautilus. Dr. Harold Crosby, the university’s first president, selected the chambered nautilus to represent UWF because he was inspired by the poem The Chambered Nautilus by Oliver Wendell Holmes; it is "a symbol of growth, change and accomplishment."[9]