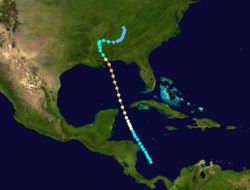 The path of 1916 Atlantic Hurricane 1

The hurricane season of 1916 saw two major storms in the Pensacola area.

The first hurricane of the 1916 season made landfall near Gulfport, Mississippi on July 6, but was strongly felt in Pensacola a day earlier, on July 5. The barometer dipped as low as 29.21 inches of mercury; high tides were recorded four feet above normal; six inches of rain fell; and severe gusts up to 104 mph ripped across the waterfront.[1] Mayor George Heinrichs estimated more than $1 million in damage, including: 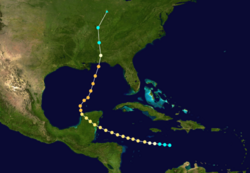 The second storm to hit Pensacola in 1916 was the thirteenth Atlantic hurricane of the 1916 season. Unlike the July 5th hurricane, this one was a direct hit. However, since it crossed the Gulf of Mexico much more quickly than the previous storm (compare graphics at right), there was less time for its winds to cause damage.

It became a tropical storm in the western Caribbean on October 12, reaching hurricane strength on the 13th before hitting the Yucatan Peninsula on the 15th as a 100 mph hurricane. It turned northward, becoming a major hurricane on the 16th. It made landfall near Pensacola on October 18, 1916.

Winds were recorded at 114 mph — until the equipment itself was blown away. Once again, the roofs were torn off many homes and businesses. The L&N warehouse at the Commendencia Street Wharf, which was damaged in the previous hurricane, now lost its roof entirely. Streets were again flooded, as was the power house. The Power Company also lost many utility poles. Fewer ships were lost in this hurricane, thanks to the steam-powered tugs which pulled them into the Bay for safety, but a few (like the tug Flanders) dragged their anchors and were driven against the shore.[2]