From Pensapedia, the Pensacola encyclopedia
(Redirected from Fort San Miguel)
Jump to navigation Jump to search

Fort George was a British fort at Pensacola, built in 1778[date uncertain] atop Gage Hill. The fort was the largest of a trio of fortifications on the hill, along with the Queen's Redoubt and the Prince of Wales Redoubt. It was surrendered to Spanish forces under Bernardo de Gálvez in the 1781 Siege of Pensacola and renamed Fort San Miguel. The Spanish government did not occupy the fort and it was allowed to deteriorate.

During the Civil War, Union forces placed a small battery called Fort McClellan on the site, and several decades later, the Confederate memorial park Lee Square was established there. The site was added to the National Register of Historic Places on July 8, 1974. In 1976, a nine-month archaeological excavation discovered remnants of both the British and Spanish forts, and a portion of the fort was reconstructed as a park maintained by the City of Pensacola.

Richard Campbell, in his Historical Sketches of Colonial Florida, describes the layout and build of Fort George:

On March 9, 1781, Bernardo de Gálvez began an amphibious siege of the British forces at Pensacola. The siege culminated on May 8, when Spanish artillery fire caused the British powder magazine at the Queen's Redoubt to explode. After Spanish forces occupied the redoubt, the remaining British contingent at Fort George surrendered the city to Gálvez. 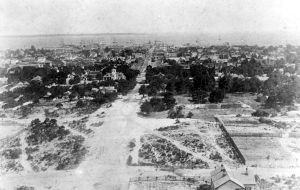 During the Civil War, Union forces occupying Pensacola built a series of defenses along the perimeter of the city. One of these, Fort McClellan, was erected in 1862 on the Fort George site, but never saw battle.

The site became known as Florida Square and was renamed Lee Square in 1889, becoming home to a Confederate memorial two years later. 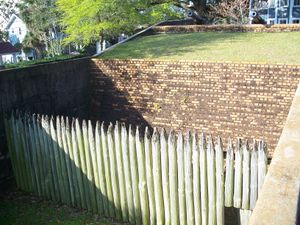 During the 1976 bicentennial, an archaeological team spent nine months excavating areas of Gage Hill. They unearthed elements of the British and Spanish forts, including a section of the moat, a powder magazine and several vaulted rooms believed to be latrines. Using the findings, a partial reconstruction of the fort was constructed lower on the hill. It is currently maintained by the City of Pensacola.

In 1981, on the two hundredth anniversary of the Siege of Pensacola, a bust of Bernardo de Gálvez, a gift from the Spanish government, was dedicated at the Fort George site. At the base of the sculpture is the Spanish phrase "Yo Solo" ("I alone").