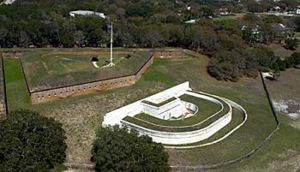 Aerial view of Fort Barrancas. The water battery is the white section.

Fort Barrancas (1839) or Fort San Carlos de Barrancas (from 1787) is the name of a historic United States military fort in the Warrington area of Pensacola. [1] [2]

The hill-top fort, connected to a sea-level water battery, overlooks Pensacola Bay, from what is now Naval Air Station Pensacola. Because the hill-top fort was rebuilt of brick, becoming Fort Barrancas, the older, water battery has also been called Fort San Carlos, separately.

Spanning a multi-century history, the U.S. Army deactivated Fort Barrancas on April 15, 1947, and after restoration during 1971-1980, Fort Barrancas was opened to the public. See: Timeline, below.

Fort Barrancas was built on the site of numerous previous forts, including from 1698, Fort San Carlos de Austria, destroyed in 1719 (See: Timeline, below, for a condensed history of the site).[2]

The site was used as a harbor fortificaton by the British, building the Royal Navy Redoubt in 1763.[1] The Spanish captured Pensacola in 1781, and completed the fort San Carlos de Barrancas in 1797.[1] Barranca is a Spanish word for bluff, the natural terrain feature that makes this location ideal for the fortress.

When Florida was acquired from Spain in 1821, Pensacola was selected as a navy yard, and harbor fortifications were constructed to protect its deepwater bay. After 1829, Fort Pickens and Fort McRee were built to defend the pass to Pensacola Bay.[1]

Fort Barrancas, expanded with brick between 1839-1844,[1] is on the mainland. It was built to defend against both sailing ships entering the harbor and attack across land. The Advanced Redoubt was built north of the fort, and a trenchline connected them. This system protected the navy yard to the east from infantry attacks. 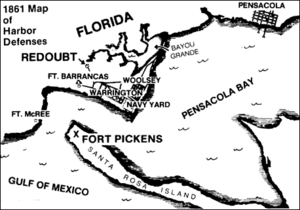 Sketch of harbor defenses at entrance to Pensacola Bay

In 1861 there was a company of 50 U.S. soldiers stationed at Fort Barrancas, under the command of John H. Winder. On January 8th, Florida state troops under Colonel William Henry Chase demanded that the federal troops surrender the fort. As Winder was not present (and would later be promoted to General in the Confederate Army), Lieutenant Adam J. Slemmer was in charge. LT Slemmer Knew that Fort Pickens was easier to defend, so he spiked the guns at Barrancas and loaded ammunition and supplies on a flatboat. He moved his company across the bay to Fort Pickens, and held that fort for the Union throughout the Civil War.

Confederate soldiers from Alabama, Louisiana, and Mississippi were then stationed at Fort Barrancas. While a small company of soldiers could man the fort successfully, additional sand batteries were constructed along the coast, and operated by these soldiers.

General Braxton Bragg took command of Confederate Pensacola on March 11, 1861, and continued work on the batteries. On October 9, a Confederate force of 1000 troops landed east of Fort Pickens, but was repelled by Union forces. Fort McRee and Fort Barrancas exchanged heavy cannon fire with Fort Pickens on November 22 and 23, 1861 and January 1, 1862. In May of 1862, after hearing that the Union Army had taken New Orleans, Confederate troops abandoned Pensacola.

Stronger cannon and Ironclad ships developed during the Civil War made masonry forts like Fort Barrancas outmoded. The fort was used as a signal station, small arms range, and storage area by the Army until 1946, when newer weapon technology made coastal defense an obsolete concept. On April 15, 1947, Fort Barrancas was deactivated, and the U.S. Navy incorporated the site into Pensacola Naval Air Station. At the same time, local leaders, Congress, and the National park service were working to designate the harbor defenses of Pensacola as a national monument. In 1971, Congress authorized the establishment of the Gulf Islands National Seashore, as part of the National Park Service, and after a $1.2 million restoration, Fort Barrancas was opened to the public in 1980.

The site of Fort Barrancas has been involved in numerous events over the past five centuries: [3]

During the past 450 years, the site has changed names several times, depending on which country ruled in the region.