From Pensapedia, the Pensacola encyclopedia
(Redirected from Florida Theatre)
Jump to navigation Jump to search 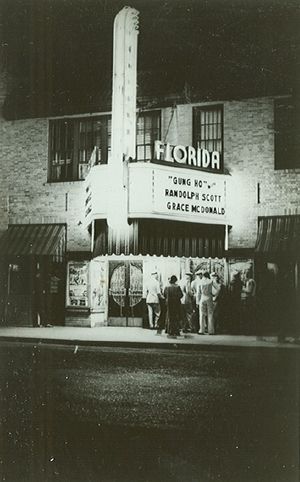 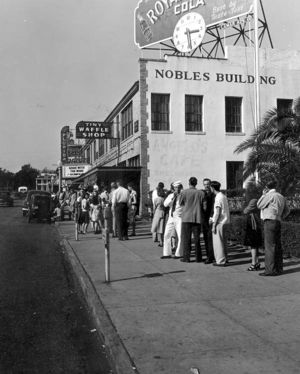 Crowds line up to see Gone with the Wind at the Florida Theatre, 1947.

The Florida Theatre was a movie theater located at 186 North Palafox Street in downtown Pensacola.

The theater opened in 1939[1] and was operated by the Pryor circuit through the early 1940s. According to the trade publication Boxoffice:

As we pilot our Plymouth into Pensacola, getting into Saenger territory, again the theatre-building tocsin is ringing. It is definitely understood, and newspaper announcements have been made to the effect that the Pryor interests of Virginia, through Chester Hester, will shortly begin construction on The Florida, a house to seat 600, on the main thoroughfare, Palofax [sic], on a site now occupied by the Nobles Building. It is understood that tenants have been served notice to vacate. There is no pronounced boom in Pensacola, so to speak, but the town looks better than on the occasion of our last visit some half dozen years ago. The Pensacola Naval Air Station—the Annapolis of the Air—as it is called, is doing much to stimulate matters hereabouts, in which the motion picture business certainly will get its share.[2]

Only a short while after it opened, the Florida was gutted by fire in 1944, causing $60,000 worth of damage to the Nobles Building. The owners held insurance on both equipment and occupancy, however, and were able to rebuild "a larger and better" theater with increased seating capacity.[3] The Pensacola City Council passed an ordinance permitting more seats to be installed in a theater of its size, but then repealed it a few weeks later.[4] It reopened in 1945 under the ownership of J. C. Hester], who refused to sell popcorn in the lobby, saying it attracted mice, and even frisked patrons to ensure they didn't bring it to the theater. (He eventually relented and began serving the concession.)

Hester retired in 1961, turning operation of the Florida over to Giddens & Rester,[5] which renovated it with new curtains and drapes.[6] The manager was Francis Boucher,[7] who arranged extravagant promotions for many of the movies; for a 1965 showing of Shenandoah, actor Phillip Alford was brought to the city, taken by military escort to a television station for a live interview, and paraded through town with six convertibles full of Naval cadets and "Shenandoah Belles."[8]

The theater was heavily refurbished in 1964 and 1971.[5] was a popular spot for family-friendly movies, especially Walt Disney films. Boucher recalled, "The Disney movies came out on special release, and we would get them before anyone. They used to call the Florida 'the house that Disney built.'" After the 1964 renovation, Walt Disney sent a telegram to the theater. "He called it 'a little gem of a theater,'" said Boucher.[1]

With the opening of the Cordova Cinema, also operated by Giddens & Rester, the Florida no longer got the most popular new movies, which were instead channeled to the newer theater. After a swift decline, the Florida closed on May 13, 1976 with a farewell screening of Gone With The Wind.[1]

After its closure as a movie theater, the Pensacola Little Theatre renovated the building and used it between 1977 and 1996. It was converted to retail space and most recently occupied by Milmo Fine Furnishings, but is vacant as of 2009.