The United States Navy purchased farmland in 1940 and developed it as an outlying landing field to support flight training operations based at NAS Pensacola. The field was initially designated Base Field 01913 (Site 3). In 1941 the field was renamed Ellyson Field in honor of Theodore "Spuds" Ellyson, the Navy's first naval aviator.[1] 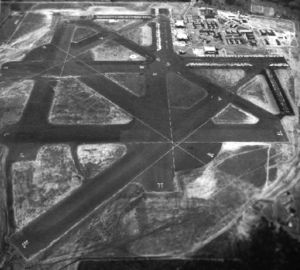 As World War II intensified, the airfield was quickly expanded. At a cost of $1.7 million, six taxiways and runways were constructed, along with three hangars, administrative and operations buildings, barracks, and a mess hall. Operations commenced on October 1, 1941 when five divisions of aircraft transferred from NAS Pensacola. Dedication ceremonies were held that morning and training flights began that afternoon. Ellyson Field was designated as a Naval Auxiliary Air Station on January 1, 1943.[2] In 1945, NAS Pensacola's Intermediate Instructor School moved to Ellyson Field.[1]

At the end of World War II, however, use of Ellyson Field quickly diminished. In November 1945, primary and basic training operations were moved to Corpus Christi, Texas, and Ellyson was used for storage until it was deactivated in 1947. Over the next few years, portions of Ellyson Field were opened up for civilian use, including a school for handicapped children and a training center for the Brooklyn Dodgers baseball club.[1]

Ellyson Field was reactivated before long, though, as the Korean War necessitated an expansion of the Navy's helicopter training program. Helicopter Training Unit One was established at Ellyson in 1950. Ellyson Field was designated as an auxiliary landing field until 1967, when it was reestablished as a Naval Auxiliary Air Station. It was elevated to full Navar Air Station status in 1968. During the 1960s, Ellyson Field also hosted helicopter training for NASA astronauts.

In the early 1970s, the Navy decided to close Ellyson due to conflicts with civilian air traffic from nearby Pensacola Regional Airport. Ellyson Field was closed on December 28, 1973, and helicopter training was relocated to NAS Whiting Field in Santa Rosa County. The Naval Education & Training Program Development Center used Ellyson until it relocated to Saufley Field in 1979, at which time Ellyson Field was declared surplus.[1] In 1983, the University of West Florida leased the former bachelor officers' quarters (BOQ) and converted the building to student housing.[3]

Although Ellyson Field has been redeveloped as an industrial park, many of its original buildings, including three hangars and the control tower and operations building, remain and have been reused by various companies.