From Pensapedia, the Pensacola encyclopedia
(Redirected from Court of Record Building)
Jump to navigation Jump to search

The Pensacola Cultural Center is a three-story building located at 400 South Jefferson Street in downtown Pensacola. It was formerly the Escambia County Court of Record Building, which was built in 1911 and served until 1978. The property was deeded to the Pensacola Little Theatre in 1988 as a home for Pensacola's art organizations and was completely renovated in three phases between 1989 and January 1996. 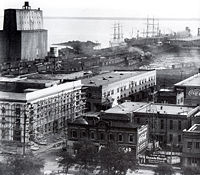 The Court of Record Building under construction in 1911

Pensacola's population was booming in the early twentieth century, forcing local government to expand its facilities. The City had recently occupied two new buildings adjacent to the Court of Record site: a Spanish-style city hall across Zaragoza Street in 1907, and a new jail across Jefferson Street in 1908. The Escambia County Board of County Commissioners, under chairman John I. Johnson, selected the site of the old County Jail and issued a $180,000 bond to pay for the project. Besides the jail and its rear courtyard, two other buildings on the block (including the Pensacola Daily News building) were purchased and razed to enable construction.

Mobile architect Rudolph Benz designed the neo-classical structure as two twin buildings connected by a courtyard. It called for brick and masonry over steel supports on a concrete foundation. The Keynton Construction Company was the original low bidder, but was absorbed into a company owned by Fernando Moreno Blount, who engineered the seven-story Blount Building a few years earlier. Wiring was installed by Peake Electrical Contractors, the ventilation system by George McGhan & Sons, and lifts by the Cincinatti-based Warner Elevator Company. The Marston & Quina Company supplied interior furnishings.

The building was occupied in January 1912, although Benz cited 89 problems in the construction that he felt must be addressed before the job could be accepted. Much of these defects were blamed on the plumbing contractor, who was dismissed and ultimately sued for $33,000 by F. M. Blount, his father and attorney R. P. Reese.

The new building had a built-in gallows on the third floor. The rope was held by an iron circle in the ceiling of judge's chambers, with a trapdoor in the floor of the execution room. The final hanging took place on July 31, 1920, when Hosea Poole was executed for killing his brother.

The Court of Record Building was renovated in 1946 at a cost of $122,750. The building's jail cells were vacated and stripped after a new jail was constructed on Leonard Street in 1955. It was closed in 1978 and its functions transferred to the new M. C. Blanchard Judicial Building on Government Street. 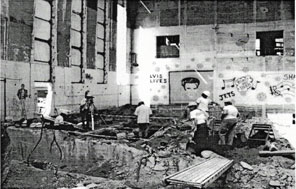 In 1988, the Escambia County Board of County Commissioners agreed to convey the aging, unoccupied building to the Pensacola Little Theatre. It was intended to serve as a home for around two dozen non-profits.

The first phase, overseen by architect Carter Quina and Greenhut Construction Company, was made possible by a grant from the Florida Cultural Facilities Development and Operational Support Program. Phases one and two were completed in April 1992, and the first tenants included Kaleidoscope & Ballet Pensacola, the West Florida Literary Federation, the African American Heritage Society and the Pensacola Children's Chorus.

The final phase of the renovation, the Mainstage Theatre, was completed in January 1996.

Cross-section of the Cultural Center, facing west towards the main entrance

The Valerie Jones Russenberger Theatre, also known as the Mainstage Theatre, is the main performance venue of the Cultural Center. It seats 474 seats over three floors.

The M. C. Blanchard Courtroom is a 2,030 sq. ft. meeting hall on the first floor of the Cultural Center. After the 1994 renovations, it was used as the Pensacola Children's Chorus rehearsal hall until the group relocated to the First Presbyterian Church's Margaret Moore Nickelsen Center.

The Atrium is an enclosed, brick-walled courtyard that formerly served to connect the Court of Record Building's judicial and detention sections. It is currently the home of the Portabello Market and is available to rent for parties and other events.