Charles Thomas Cottrell (1863-1952) was a professional photographer in Pensacola from the 1890s to the mid-1940s. Originally from Kentucky, he moved to Pensacola in 1893. He established a photography studio at 204½ South Palafox Street circa 1900.[1] 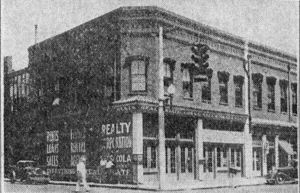 Cottrell's studio, on the second floor of 204 South Palafox, with glass wall on north side.

Cottrell's studio was known as the "Glass House" due to its large glass wall and skylights, which allowed Cottrell to use daylight instead of artificial lighting, giving a softer, more natural look to portraits. While portrait photography accounted for a portion of his business, the majority of his income derived from artistic landscape photographs, which he sold as picture postcards. He also invented a mixture called "Nostane," sold through photographic supply stores to remove chemical stains from photographers' hands.

Cottrell was an avid sailer and one of the original founders of the Pensacola Yacht Club. Ships in the club's fleet were among his favorite photographic subjects.

In the 1940s, after nearly fifty years in the photography business, Cottrell was no longer able to haul around his 8×10 view camera, and decided to retire. According to artist Manny Runyan, who operated a studio across the hall in the Palafox building, "Mr. Cottrell got old and sick and just walked out. He left me the key and told me to keep an eye on things."[2]

He and his wife moved in with one of their daughters at Mount Dora, Florida, for the remainder of their lives. Photographer Lewis E. Ashley, who had first met Cottrell while working for the Elebash Jewelry Company, contacted him and purchased the contents of his abandoned studio, including about five tons of glass negatives. Many of the prim negatives were later purchased by Philip A. Pfeiffer in the mid 1970s, while some remaining glass negatives plus "copy" negatives were still later purchaed by Dolores Pittman.[3]