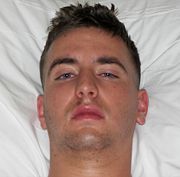 Brandon Michael Ward (b. August 9, 1986) is a former U.S. Marine convicted of second-degree murder and attempted second-degree murder for a June 25, 2006 incident in which he stabbed two men, Joseph Hall and Joseph c. Hall died from the injuries. Ward was sentenced to life in prison on July 19, 2007.

Ward began dating Samantha Sparling, four years his junior, when he was in San Diego for basic training. When Ward was transferred to northwest Florida, Sparling moved to Milton to live with her mother. Ward stayed at her house on weekends.

On the night before the incident, Ward, 20, attended an East Milton party with Sparling, 16. The two became separated at the party. Ward fought and wrestled with other attendees, while Sparling became the subject of aggressive sexual advances by one of the party's hosts, Nick Cote. According to Sparling's testimony, she "gave in" to the advances because "it felt good."[1] When Ward discovered the pair engaged in a sex act, he became enraged. Ward was ejected from the party after Sparling told partygoers that he struck her. Though her story was corroborated by other witnesses, she later testified that it was a fabrication to conceal her embarrassment.

Ward testified that, as he drove back to Sparling's home, he received several threatening cell phone calls from partygoers.[2]

After being comforted by others at the party, Sparling was driven to her Munson Highway home by Ruinato, Hall and another teenage girl, Lacey Moores. When they arrived, Ward's car was present. A fight ensued, during which Ward produced a butterfly knife and stabbed both Hall and Ruinato three times. (A major issue of contention at Ward's subsequent trial was whether the stabbings were unprovoked or in self-defense.) Hall was pronounced dead at the scene from the injuries.

Attorney Leo Thomas defended Ward under Florida's "Stand Your Ground" law, passed on October 1, 2005, on the grounds that Ward regularly stayed at Sparling's house and was justified in using deadly force. "This is a tragedy for everyone involved. There's no question about it," Thomas said. "But the evidence will show it was an honest case of self-defense."[3]

Thomas portrayed the fatal altercation as being instigated by Hall and Ruinato, citing the former's MySpace page — which had the address "joehallwillkillyourfamily"[4] and featured a violent music video by the band Waking the Cadaver[5] — as an alleged indicator of Hall's violent tendencies. Prosecutors argued that the attacks were unprovoked, citing testimony from witness Lacey Moores, who said Ward had been hiding in the bushes before emerging and stabbing the two men. This contradicted her initial sworn statement in which she claimed Hall and Ruinato "ran after" Ward.[6]

A jury found Ward guilty on May 24, 2007.[7] On July 19, 2007, Ward was sentenced by Circuit Court Judge Ron Swanson to serve life in prison for the murder of Hall. He received an additional 25-year sentence for the attempted murder of Ruinato, which Ward will serve concurrently.[8]

On July 16, 2009, Ward was granted a new trial by the First District Court of Appeals, on the grounds that jury instructions in the first trial were incorrectly worded.[9] On October 15, 2010 the second trial brought a verdict of manslaughter for Joe Hall and 2nd degree attempted murder for Joey Ruinato. ==References==