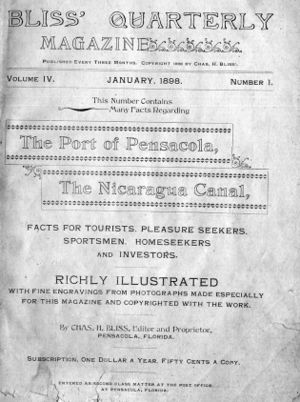 The Bliss magazines were a series of magazines, generally published quarterly by Charles Henry Bliss, and called at various times Bliss' Magazine, The Bliss Magazine, and Bliss' Quarterly.

An ad which Bliss ran in during his campaign for reelection as Pensacola's mayor claimed that Bliss has "published more literature favorable to Pensacola than any other man, living or dead," going further to state that, "[Bliss] has, during the past ten years, printed ten handsome magazines filled with the finest of cuts and choicest of literature, which have found their way to every city in the world and done more than all other efforts combined to make Pensacola favorably known."[1]