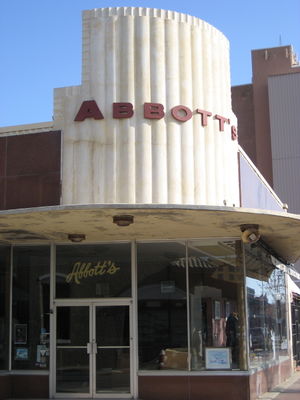 Abbott's at Palafox and Intendencia

Abbott's Military Tailors, Inc. is a military clothing store owned by Bill Warren that supplied uniforms to Naval Air Station Pensacola officers for seventy years, from 1947 to 2007. From 1977 to 2009 it is located at the southeast corner of Palafox and Intendencia Streets — formerly the site of the Jackson residence until it was destroyed by an 1839 fire.

Following a 2005 Base Realignment and Closure decision to merge the Officer Candidate School (OCS) at NAS Pensacola with another OCS at Newport, Rhode Island, Abbott's announced it would expand as well.

According to Warren, "The OCS students are about 30 percent of our business."[1] The Palafox Street store will close following the September 21, 2007 graduation of the final Pensacola OCS class. This is incorrect. Abbott's did not close and leased the building out in May 2009. Abbott's has a temporary location at 700 E. Cervantes St. Suite C, Pensacola, FL 32501. We are open from 9-5.

An administrative office and warehouse facility will remain in Pensacola.