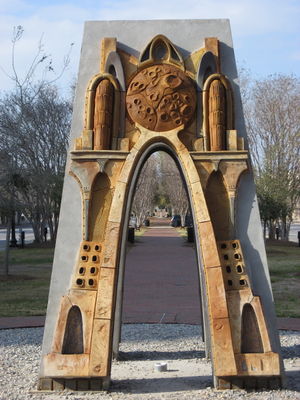 9-11 Homage to America is a sculpture by artists Peter King and Xinia Marin located on the Palafox Street median just north of Garden Street and south of Martin Luther King Plaza. The 12-foot, 10,000 pound archway is a memorial to the victims of the September 11, 2001 terrorist attacks.

The statue was donated to the City of Pensacola by King and Marin, who own Stonehaus Pottery Gallery & Tile on 12th Avenue. The piece originated as part of an exhibition, entitled "Architectural Passages," that the couple completed on September 10, 2001. After the attacks, they revised the concept of the sculpture, depicting "the melding of global cultures [and] the creation of a tolerant and diverse society living peacefully together on one planet."[1]

A dedication ceremony was held on September 11, 2004, the third anniversary of the attacks.