The Saenger Theatre, affectionately called the "Grand Dame of Palafox," is a historic theater on South Palafox Street. Opened in 1925 as a Vaudeville performance hall, it later became a movie house until its closure in 1975. The building was saved from demolition when it was donated to the City of Pensacola; it was then restored, reopening in 1981. Since then it has become a popular concert venue and is home to many of Pensacola's performing arts organizations. 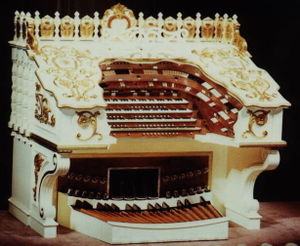 The Robert Morton organ installed in 1927

The Saenger Theatre is one of several Pensacola theaters opened by the Saenger Amusement Company (the others being the Rex and Isis Theatres). It was designed by New Orleans architect Emile Weil, who designed many theaters of the same name across the country (including the Mobile Saenger). Bricks and iron railings were salvaged from the rubble of the old Pensacola Opera House, demolished after being damaged in the hurricanes of 1916 and 1917, and incorporated into the Saenger's construction by builder C.H. Turner.

The Pensacola Saenger opened on April 2, 1925, at the peak of Vaudeville popularity; its first performance, emceed by County Solicitor William Fisher, included an orchestra performance of "The Star-Spangled Banner," followed by Miss Kehoe's Aesthetics Dancing Class performing the "Dance of Old Seville," then a solo by Agnes Neudorff, plus the crowning of Blanche Morgan as Miss Pensacola, and finally the main feature: Cecil B. de Mille's The Ten Commandments, projected from "Dr. Mendenhall's new transvertical non-statical projectographic machine."[1] In 1927, a Robert Morton organ (later nicknamed "Lola") was installed in the theater.[2]

As the popularity of Vaudeville-style performances waned, seats were added to make the Saenger strictly a movie house. During World War II, it showed newsreels 24 hours a day. The box seats were torn down as movies were increasingly shot in widescreen. During the 60s and 70s, with the arrival of more modern theaters, movie audiences abandoned the Saenger. It gained the reputation as an adult movie house and continued to deteriorate. The owners, ABC Southeastern Theatres, closed its doors on November 13, 1975, and donated the building to the City of Pensacola a month later on December 8. After Pensacola Junior College rejected an offer to take control, the Saenger's future looked bleak, until the University of West Florida pledged a half-million dollars to rent the theater over the next twenty years. Combined with donations raised by the newly-formed "Friends of the Saenger" and a city loan, $1.6 million was spent to bring the Saenger back to its 1925 glory: the box seats were restored from Weil's original blueprints, the main floor was newly-carpeted and reupholstered, and the stage's electrical components and curtain/fly systems were upgraded to modern standards. It reopened on September 26, 1981, with "A Champagne Evening to Remember," featuring a performance by the Duke Ellington Orchestra.[3]

Since its 1981 reopening, the Saenger has become Pensacola's premier mid-size venue. It is the primary performance home of 45 organizations including the Pensacola Symphony Orchestra, Pensacola Opera, Pensacola Children's Chorus and Ballet Pensacola. Managed by Philadelphia-based SMG, the Saenger also hosts touring musicians, Broadway-style shows and other entertainments. Renovations in 1996 doubled the number of restrooms, increased the lobby and concession area, and added a ramp and elevator for accessibility.

The Saenger closed in mid-2007 for a comprehensive "Expansion and Renovation Project" that enlarged the total area of the theater from 33,514 to 61,570 square feet. Designed by architect Miller Caldwell, Jr. of Caldwell Associates, some of the renovations included:

When the renovation project was initially approved in February 2005, it was estimated to cost around $9 million: $6 million paid by the City of Pensacola's local option sales tax, $2 million from Escambia County, and the remainder from grants and private donations. In 2007, however, revised projections put the cost closer to $15 million. According to Capital Committee chairman Bill Greenhut, owner of Greenhut Construction Company and community leader of the fundraising efforts, "Construction costs have gone up around 40 to 50 percent, and I can attest to that."[4] Due to the crisis local governments are facing with property taxes and insurance, combined with the City of Pensacola's 2007 budget shortfall, fundraisers were reluctant to ask for more public funding. However, Greenhut says, "If there's better news from the Legislature, we would like to go back to the City Council in April or May and ask for an additional sum of money."[4]

The final performance at the Saenger before it closed for renovations was "Get Back! Cast of Beatlemania" on June 30. At the time, a Pensacola News Journal article disclosed that only about $8.75 million had been raised, and that about $900,000 expected from state grants had fallen through in the Florida Legislature.[5]

On September 10, 2007, the Pensacola City Council's Committee of the Whole voted to provide an additional $6 million to the renovations, borrowing the funds from an outstanding capital improvement bond.[6] The total public commitments were $10 million from the city and $4 million from the county. The Friends of the Saenger organization is obligated to raise at least $1 million in private contributions. Donors of $1,000 or more will have their names engraved in one of the new seats.[7] 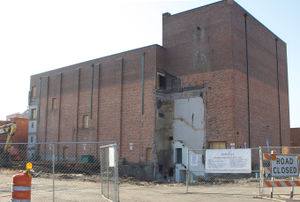 Part of the Saenger's south side was demolished on March 13, 2008 to make way for the expansion

Of the $15 million projected cost, only $12.8 million was reserved for actual construction; the remainder will be used for furnishings and other expenses.[8] Turner Construction Company was unable to deliver within the renovation budget, so the city initiated a new bidding process. Dooley Mack Construction of Santa Rosa Beach submitted the lowest bid of $12.31 million — $300,000 less than the only other bidder, Pensacola-based Morette Construction.[9] According to their contract, the theater must be renovated and reopened within 300 days, and all work must be completed within 13 months.

An official groundbreaking ceremony was held on February 8, 2008.[10]

The theater reopened in early-2009. Many performing arts groups that used the Saenger as their primary venue found alternative sites for the intervening seasons. For example, the Pensacola Symphony Orchestra held its 2007/08 "Masterworks" concerts at First Baptist Church.

The Saenger Theatre is one of the City of Pensacola's Enterprise Operations, like the Pensacola Regional Airport and Energy Services of Pensacola. It receives approximately $150,000 from the City's annual budget for operating and capital expenses.[11]