From Pensapedia, the Pensacola encyclopedia
Revision as of 22:18, 10 November 2008 by Dscosson (talk | contribs) (New page: thumb|right|''Plano, Panzacola, 1812'' The '''Pintado plan''' is a street map drawn by Vicente Sebastián Pintado in 1812. It was published the foll...)
(diff) ← Older revision | Latest revision (diff) | Newer revision → (diff)
Jump to navigation Jump to search 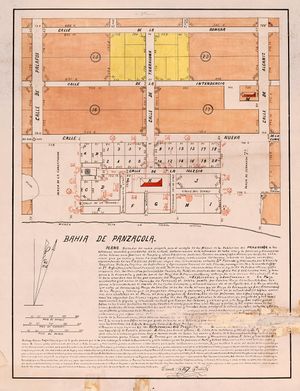 The Pintado plan is a street map drawn by Vicente Sebastián Pintado in 1812. It was published the following year under the title Plano, Panzacola, 1812.

Confusingly, what is now Seville Square is depicted as "Plaza de Fernando 70" (Plaza of Ferdinand VII), while the plaza to the west that currently bears that name is called "Plaza de la Constitución" (Constitution Plaza).