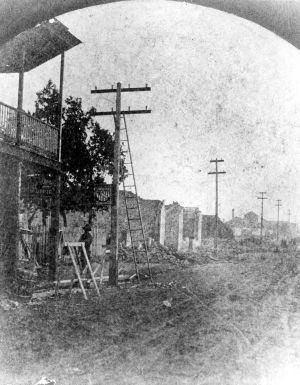 Photo of the fire's devastation 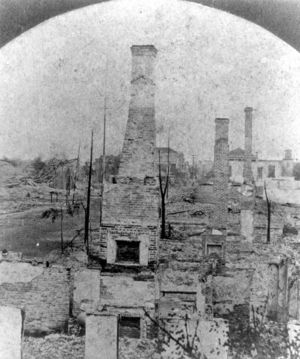 Only brick chimneys remained of some buildings

A fire that erupted in the early morning of December 11, 1880 destroyed five blocks of downtown Pensacola, including several government buildings and "nine-tenths" of the city's business district.

The fire spread quickly by a brisk wind, sweeping down Palafox from Romana to Government Streets. Reaction to the fire was slow, as the only steam-powered fire engine in town was at a machinist's shop being repaired, but eventually citizens formed a bucket brigade. The fire was stopped at the City Hotel near Tarragona Street to the east, and behind the Customs House to the west.

Damages were estimated between $500,000 to over $1 million. Two lives were lost.[1] Over 100 buildings and businesses were razed by the fire, including:

Many of the businesses had just received their Fall stocks. Insurance coverage was initially estimated at $250,000.

The County Clerk, Filomeno de la Rua, rescued the important records from his office at the cost of his own residence, which was also destroyed by the fire.