From Pensapedia, the Pensacola encyclopedia
(Redirected from Pensacola Telephone Exchange)
Jump to navigation Jump to search

A telephone exchange or telephone switch is the system of electronic components which connect phone calls. Pensacola has had several exchange systems over the years.

Pensacola's first telephone exchange was established by Southern Bell on the northeast corner of Government Street and Palafox (now the site of Seville Tower). It went operational on September 1, 1880, serving 31 telephones. A considerable development for the area, as the first commercial telephone exchange had only been established about two years earlier, the Pensacola exchange was the first in Florida to have exclusive operating rights in its municipality. Unfortunately it was destroyed in the fire of 1880 only a few months later. A historical marker was placed on the street corner by the Pensacola Council of the Telephone Pioneers of America on January 17, 1964.[1] 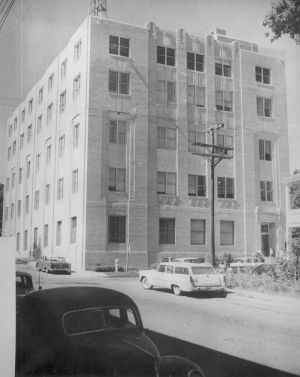 The five-story Southern Bell Building at 30 West Belmont Street was erected in 1931. It was home to the Hemlock Central Office, "HEmlock" being the alphabetical code for "43" numbers. The building was expanded in 1946, 1950 and 1951.