Daniel James was born February 11, 1920, in the Eastside neighborhood of Pensacola and graduated from Washington High School in June 1937. From September 1937 to March 1942, he attended Tuskegee Institute, where he received a bachelor of science degree in physical education and completed civilian pilot training under the government-sponsored Civilian Pilot Training Program.

In September 1949, General James went to the Philippines as flight leader for the 12th Fighter-Bomber Squadron, 18th Fighter Wing, at Clark Field. In July 1950, he left for Korea where he flew 101 combat missions in F-51 and F-80 aircraft.

General James returned to the United States and, in July 1951, went to Otis Air Force Base in Massachusetts as an all-weather jet fighter pilot with the 58th Fighter-Interceptor Squadron and later became operations officer. In April 1953, he became commander of the 437th FIS and, in August 1955, he assumed command of the 60th FIS. While stationed at Otis, he received the Massachusetts Junior Chamber of Commerce 1954 award of "Young Man of the Year" for his outstanding community relations efforts. He graduated from the Air Command and Staff College in June 1957. 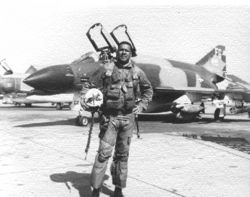 General Daniel "Chappie" James, Jr. in front of his McDonnell-Douglas F-4C Phantom in Thailand during the Vietnam War.

James went to Ubon Royal Thai Air Force Base, Thailand in December 1966, as deputy commander for operations, 8th TFW, and in June 1967 was named wing vice commander, under Colonel Robin Olds, a triple ace. Both in their mid-40's, they formed a legendary team nicknamed "Blackman and Robin." James flew 78 combat missions into North Vietnam, many in the Hanoi/Haiphong area, and led a flight in the "Operation Bolo" Mig sweep in which seven Communist Mig-21's were destroyed, the highest total kill of any mission during the Vietnam War.

He was named vice commander of the 33d TFW at Eglin Air Force Base in December 1967. While stationed at Eglin, the Florida State Jaycees named General James as Florida's "Outstanding American of the Year" for 1969, and he received the Jaycee Distinguished Service Award. He was transferred to Wheelus Air Base in the Libyan Arab Republic in August 1969 as Commander of the 7272nd Fighter Training Wing.

General James was promoted to four-star grade and assigned as commander in chief, NORAD/ADCOM, Peterson Air Force Base, Colorado, on September 1, 1975. In these dual capacities, he had operational command of all United States and Canadian strategic aerospace defense forces. He assumed duty as special assistant to the chief of staff, U.S. Air Force on December 6, 1977. 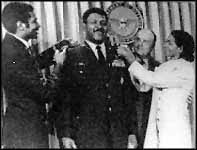 General James was widely known for his speeches on Americanism and patriotism for which he was editorialized in numerous national and international publications. Excerpts from some of the speeches have been read into the Congressional Record. He was awarded the George Washington Freedom Foundation Medal in 1967 and again in 1968. He received the Arnold Air Society Eugene M. Zuckert Award in 1970 for outstanding contributions to Air Force professionalism. His citation read "... fighter pilot with a magnificent record, public speaker, and eloquent spokesman for the American Dream we so rarely achieve." James was also known to have lobbied for the adoption of the F-14 in the USAF.[citation needed]

Other civilian awards that General James received included the following:

General James died of a heart attack on February 25, 1978, at the age of fifty-eight, less than a month after retiring from the Air Force.

General James's son, Lieutenant General Daniel James III also served in the United States Air Force and in the Texas Air National Guard. He served from 1995 to 2002 as the Adjutant General of the Texas National Guard (the first African American to hold the post), and as Director of the Air National Guard from 2002 to 2006. In the summer of 2006 he retired from the United States Air Force after 38 years of commissioned service, on active duty and as an Air Guardsman, at the rank of lieutenant general. He died shortly after he retired, due to a heart attack.