William Franklin Lee was a civil engineer and Confederate soldier. The historic Lee House in downtown Pensacola, demolished in 2005, was built by him in the 1860s.

Originally from Charleston, South Carolina, Lee moved to Pensacola in the 1850s and worked as a surveyor for the Pensacola and Georgia Railroad. He married Susanna Rebecca Lloyd and began work on their family home at 226 East Gregory Street.

A fervent supporter of the Confederacy, Lee volunteered for military service on January 12, 1861 — two days after Florida seceded from the Union. He assisted in the engineering of Pensacola's harbor defenses and joined Edward A. Perry's Pensacola Rifle Rangers as a second lieutenant. He saw action as far north as Virginia and was wounded at the Battle of Chancellorsville, forcing the amputation of his right arm. 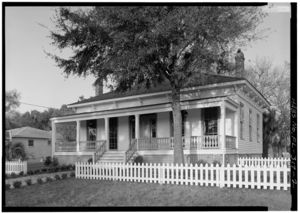 The Lee House at Alcaniz Street and Bayfront Parkway

Returning to Pensacola after the surrender at Appomattox, Lee found his unfinished home had been vandalized by the occupying Federal forces. He finished the building in 1866.

Lee Street is named for him. Lloyd Street, running parallel one block to the south, is named for his wife. The William Franklin Lee house was relocated by the Historic Pensacola Preservation Board from its original location to 420 South Alcaniz Street in 1967 and was later renovated as the headquarters of the Pensacola Association of Realtors. A fire gutted the building in 2001, and after receiving further damage from Hurricane Ivan, it was finally demolished in May 2005.