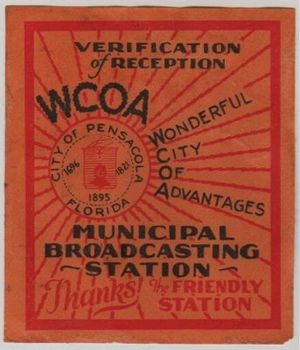 WCOA is the oldest radio station in Pensacola and one of the oldest in Florida. It broadcasts on the AM 1370 frequency. The call letters stand for "Wonderful City of Advantages."

The station was founded by the City of Pensacola under Mayor J. Harvey Bayliss, and City Clerk John E. Frenkel, Sr. was appointed to manage operations. The station went on the air at 8:30 PM on February 3, 1926. The first broadcast featured a song written for the station, "Down Pensacola Way," with Frenkel providing the vocals. Operations were temporarily disrupted by the 1926 hurricane, but were quickly restored. Frenkel became the station's main voice for years, styling himself "the Breezy Boy from the Gulf."

WCOA was purchased by John C. Pace in the early 1930s, and operations were moved to the top floor of the San Carlos Hotel.

The station is currently owned by Cumulus Broadcasting. It switched to an all-talk format in 1991 and carries a number of nationally syndicated talk shows, including Rush Limbaugh, Sean Hannity and Michael Savage. Its own call-in talk show, "Pensacola Speaks," was founded in 1960 and is one of the oldest in the nation and has been hosted since the early 1990s by Luke McCoy. Pensacola Speaks ended in 2008 and was replaced by nationally syndicated programs.

As the designated Emergency Alert System radio station for the area, WCOA is equipped to operate even after a hurricane. Hurricanes Erin and Opal in 1995 first tested this capability.