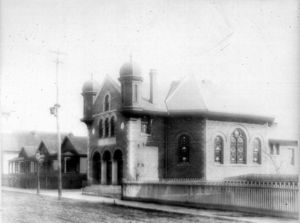 Joe: Where are you getting the temple history from? I ask because the FPC has the photo at right called "Beth-El Synagogue", dated 1912, with the note "Located at 37 E. Chase St.", which would be near Jefferson. However, our article states, "The original temple, on Chase Street at Jefferson, was destroyed by fire in 1895."

I can't remember, and like a lot of early articles I did a lousy job citing my sources. I probably tried to reconcile information from the Chase Street historical marker, one of Mr. A's books and some other sources, so there was plenty of room for mixup. Let me try to retrace my steps. — admin • talk  15:49, 15 September 2008 (UTC)

Okay, Mr. Appleyard's pamphlet on the Temple says the original building on Chase Street burned in 1895, and then they rebuilt on the same site. The second building burned down on December 17, 1929, after which they built at the current location. So I don't know where I got the info about a South Palafox location. — admin • talk  16:18, 21 September 2008 (UTC)

In the two photos of the Chase Street temple there are small differences between the buildings, such as the absence of turrets in one, and the different style of windows on the top of the front... are we thinking that these two photos are the same structure, but the building was changed or improved, or is it possible one of these is the first temple and one is the second? dscosson ··· talk 17:04, 21 September 2008 (UTC)