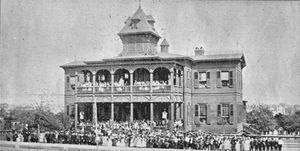 "Pensacola Public School No. 1"
OK. It's not the depot, it's part of the structure. See the picture to the right. This (and the picture I linked earlier) looks to be a different structure altogether than what we have at this article. Both are referred to variously as Public or High School No. 1 ... weird. I'm pretty sure this is a later structure, but it is not the PHS from Lee Square -- I've seen pictures and that's an entirely different building. Unless this structure preceded it on Lee Square. dscosson ··· talk 11:56, 25 April 2008 (CDT) 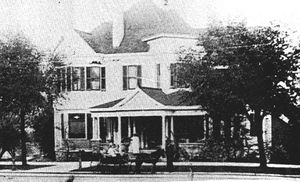 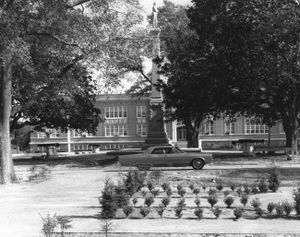 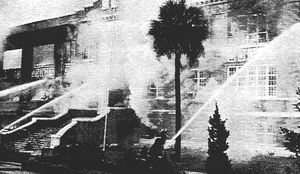 Okay, he wasn't familiar with the old drawing from the Historical Quarterly, but I'm pretty sure, since that rendering matches the Wellge map so well, that it was the only school building that was down on Wright by the Depot (i.e. between 1875-1887, as per the article). The new photo you found shows pretty clearly that the building was on a hill, presumably Gage Hill. It seems reasonable to infer that the building with the towers stood on the hill from 1887 to when it burned down in 1919 (according to Mr. Appleyard). Maybe they appropriated that old Victorian house to serve as the school until the Pensacola High School building was finished in 1921. That building was annexed by nearby PJC and burned in 1968. --Admin 12:54, 28 April 2008 (CDT)

Update: Mr. Appleyard found some cards in his possession of the Wright Street schoolhouse. There's the one that was shown in the FHQ, as well as another one that seems to show the same building before it's expansion. I'll scan them in sometime soon. He also conveyed to me that the Victorian home on Lee Square was not used in the 1919-1921 construction period. Rather, there was another building at Baylen and Chase which had been built (by the school board?) for a traveling evangelist, who had moved on by the time of the 1919 fire. --Admin 12:15, 2 May 2008 (CDT)