A car displaying the six versions of the campaign's signature magnets

A Pensacola branding initiative was undertaken by the Pensacola Bay Area Chamber of Commerce in 2007. Their goal in creating a distinctive brand for the Pensacola area is to create a "product truth" that would help residents "reinvent and rediscover a new sense of community pride."[1]

When Charles Wood, the Chamber's senior vice-president for economic development, moved to Pensacola in 2006, a city-wide branding initiative was a major priority:

There is so much history here, and I don't know all the history, but there is a lot of economic development that runs through the history of Pensacola, and I like that. … I think there are some things that need to be started right away. The "branding" of Pensacola is one issue.[2]

The subject was the focus of an IHMC lecture by Carol Coletta of CEOs for Cities. According to Coletta, "A city brand has to be felt through the community as a shared story. … There are obvious economic and social benefits for those who do it right. But if you make a mistake or don't do it well, the people in that town will give you hell."[3]

The Chamber hired Coletta's Memphis-based firm Smart City Consulting, along with Stone Mantel of Colorado Springs, to study the Pensacola area and create a new "brand" for the city. Members of both firms traveled to Pensacola several times and held a series of charrettes in May 2007 to gain input from citizens. Tom Jones, a consultant with Smart City, said of the process, "We just came up with a list of adjectives and asked people, 'What do you want your city to be?' We just repeated back to the chamber what those folks said to us."[4]

Local advertising executive Jane Birdwell came up with the magnet idea, according to Jones, and her firm BPM helped with the brand rollout. "The branding process gives people an opportunity to talk about their passions, what they love about this city, what their life experiences are here," Birdwell said. "Because while we might have issues with things and areas to improve, by and large we're all here because we love this place."[5]

Chamber president and CEO Evon Emerson said of the project, "This may well be the most important initiative undertaken during my service to the chamber. From an economic perspective, it will help us recruit and retain quality businesses and talented individuals. From a community perspective, it will help us define who we are now and who we want to be in the future."[6] 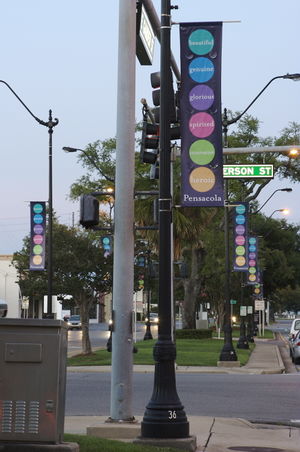 The first phase of the initiative, unveiled in September 2007, was a series of circular car magnets featuring six adjectives on brightly colored backgrounds. The words — heroic, genuine, beautiful, innovative, spirited and glorious — were chosen "to capture the essense of the city."[1]

The words were also used in banners placed around downtown Pensacola and on other merchandise available from the Chamber, as well as a videotaped advertisement.

In a viewpoint published in the Pensacola News Journal after the initiative was announced (but before details were announced), Ron Melton criticized the Chamber for "fretting too much about the lack of a superficial advertising identity and not doing enough to create a better education system, a cleaner environment and utilization of smart growth."[7] A later editorial by the News Journal called the Chamber's effort "a serious one" that "has focused on the right things, beginning with our 450-year history."[8]

Independent News publisher Rick Outzen said he dons the "heroic" magnet on his vehicle "to recognize and remember the heroes of Hurricane Ivan who have worked so hard to rebuild our community."[9] The publication parodied the magnets in its 2007 "Best of the Coast" issue, joking that "if you see the six words … enough and speak them over and over again, then the Pensacola area will become those words. It's called 'branding.'"[10]

In December, Chamber President Evon Emerson said they were "just thrilled with the success of the magnets," and that they were ordering 5,000 more after the first 25,000 had been picked up in a matter of weeks.[4]

Fred Gunther claimed that Evon Emerson had refused to provide these costs when he requested them, which led him to cancel his company's Chamber membership.[11]